That was going to be the title of my first post on National’s tax-cut plan but then it turned out National’s plan would actually make about 1 million taxpayers worse off compared to Labour’s cuts (all figures derived from the Budget and National’s tax policy). That 1 million comprises approx 650,000, including nearly all super-annuitants, on incomes between $14,000 and $24,000 and approx 350,000 on incomes between $24,000 and $44,000 who get Working for Families, Super, or a benefit. They would miss out on Labour’s threshold rises and National’s Independent Earner Rebate. Someone living on a trust or investment income does count as an Independent Earner for National. 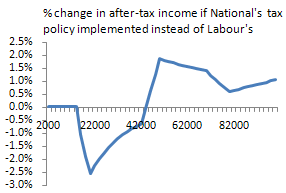 It’s all small change at every level. The 1.1 million who would get an additional tax cut from National would see their after-tax incomes increase by 1-2% (the 600,000 on $14-24K would see theirs fall 1-3%). Nearly all of them would get $14 or less more than they would from Labour. About 300,000 of them would have to offset that against lost Kiwisaver contributions of $20 plus a week.

Fewer than a quarter of taxpayers would get a net benefit from National’s cuts, with nearly all of the money going to the small number on more than $80K. Everyone else either gets nothing, gets less, or loses more in Kiwisaver contributions.

Key promised his tax cuts would lift the economy, close the wage gap, lower emigration, lift productivity, prevent doctors’ strikes… The idea that these cuts would lead to any of those promises being fulfilled is, of course, laughable. Key has had his big shot and he blew it. Now we know that, for all his hype, Key can only deliver small change.