Snow storm shout out to the undeserving poor 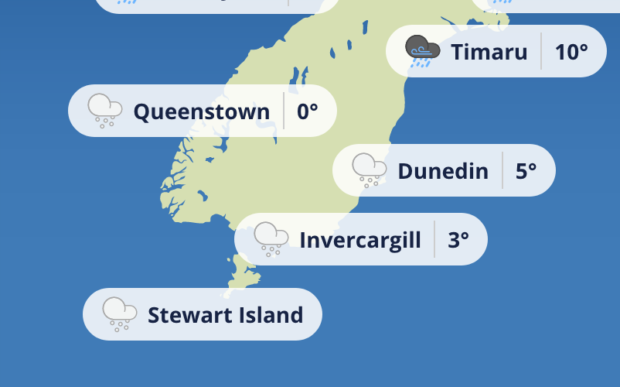 Forecast is for snow all through Monday and Tuesday.

NIWA forecaster Nava Fedaeff said the South Island is in for very strong winds throughout the day, and widespread snowfall above 200m tomorrow.

Yep, it’s fucking cold. I was fortunate enough to have firewood to bring in last night ahead of the storm and to be able to afford to turn the heater on at 5am when I was woken by the cold. Many others are not so lucky.

The Winter Energy Payment, one of Labour’s attempts to solve the problem of having so many New Zealand citizens living in health destroying poverty, ends in 3 days. That means the power bill that beneficiaries get next month, from the electricity they use this week, will coincide with a drop in weekly income of $40 – $63. You can do the maths on that.

(and no, beneficiaries who don’t have enough to live on, whose bank account empties half way through the week, every week, can’t save for a snowy day).

It’s common for low income people to be running out of firewood this time of year too.

Beneficiaries tend to live in older housing. Many houses in Otago and Southland are drafty, poorly insulated or not insulated at all, so space heating is both less efficient and more expensive. Some houses are damp as well as cold. Heating the room you are in rather than the whole house is pretty standard for people living in poverty.

Labour refuse to raise benefits for people living in these situations. They also refuse to plan for or even acknowledge the 100,000 people on benefits who cannot work due to illness or disability and who are thus utterly failed by Labour’s work will set you free approach to poverty.

Some of those illnesses are exacerbated by being cold, which means less ability to do things like beg WINZ for more money or hack the system to find things to burn in the fire place.

If you have to go outside, then when you come inside you have to be able to get warm, but this is very hard if you have a cold house and are disabled. This is how people get sick, and this is how unwell people get really sick. Not good at the best of times, doubly so while trying to contain a pandemic.

Media reports this morning are full of warnings about snow to low levels, road closures and care with driving/travel, and potential issues for stock on farms. Nothing about the humans who are going to really struggle this week. Out of sight out of mind I guess.

I also think there are substantial issues here for the working poor, especially those with precarious hours who also don’t have enough to live on each week. Some of these people will be helped by Labour’s work policies, but there will be others that won’t, especially as the covid recession kicks in.

I’m trying really hard here to not say Fuck You Labour, who are planning an employment insurance scheme for the well off but still can’t mention the word disability. I’m also wondering where the left’s conscience went and if all the pre-2017 election rhetoric around wanting to solve poverty was so much hot air (not enough hot air to make a difference).

Some will argue that Labour can’t fix everything over night (subtext is disabled, non-working poor should get to the back of the line, as if we weren’t already there), but the problem here is not that Labour don’t have a magic wand, it’s that they don’t have any kind of plan. That combined with their core position that poverty is resolved by jobs, makes it clear that there is nothing coming up that is going to help the large numbers of people who cannot work.

Labour don’t deserve the welfare portfolio. For anyone wanting to genuinely have this situation change, or see what solutions can look like, please see the Green Party and Māori Party’s welfare policies. The more progressive MPs we have in parliament, the more likely we will get action.

84 comments on “Snow storm shout out to the undeserving poor ”