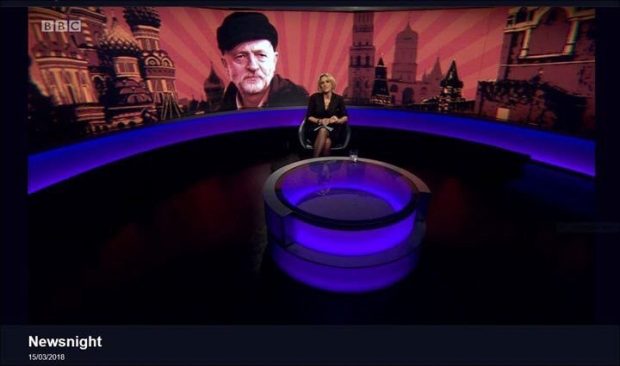 There have been ongoing complaints from the left about BBC’s editorial independence.  You would think that the doyen of world journalism would do its best to make sure that it treated UK politics in a fair and balanced way.

But there have been grumblings for a while.  They reached a crescendo when Newsnight used the above graphic during a recent show.  The picture of Corbyn appeared to have a digitally altered hat.  The original picture showed him wearing a non descript hat but with what appeared to be a few Photoshop tweaks it was made to resemble a Russian hat.

RT collated the arguments against what happened in this video.

A number of people complained.   The BBC has responded by claiming that the backdrop was an editorial decision based on “sound news judgment”.

The BBC has formally rejected complaints that its Newsnight programme Photoshopped an image of Jeremy Corbyn to make him look “more Russian”, insisting that the programme’s use of the picture was “impartial and fair”.

The corporation’s complaints unit said the decision to show a photo of the Labour leader wearing a “Lenin-style cap” in front of the Moscow skyline was not designed to convey an impression of pro-Russian sympathy on Corbyn’s part but was in keeping with an editorial decision made on the basis of “sound news judgment”.

Video of the alleged Photoshopping incident attracted millions of views following the Newsnight episode broadcast on 15 March, in which the programme discussed Corbyn’s reaction to the poisoning of Sergei and Yulia Skripal in Salisbury and alleged involvement of the Russian state.

Viral footage of the graphic prompted 48 people to formally complain to the BBC that the decision to use the image of Corbyn wearing a cap represented anti-Labour bias on behalf of Newsnight, that the image had been manipulated to emphasise the Russian elements of this hat, and that this bias had been compounded by the decision to include a stylised Russian backdrop.

The BBC’s complaints unit rejected this and ruled the main reason Corbyn’s cap looked more like a Soviet-style fur hat was that the image had been projected on to a large curved screen in the TV studio.

The ruling admitted that some members of the public illustrated their complaints with copies of the original photograph next to a screengrab of the equivalent image in the programme, in which the hat did appear to be slightly taller.

“This, however, was not the result of Photoshopping or otherwise manipulating the image. It resulted from the fact that the screen on to which the image was projected is curved, meaning that the image as a whole appeared higher in relation to its width than it would on a flat surface.”

The BBC may be correct.  Petapixel has concluded that the change in the shape of the hat was caused actually by the curved screen rather than photoshop.

But the overall impression created by the image, that Corbyn is a Russian stooge, is unmistakable.  And especially frustrating given the Conservative Party’s strong links to Russian funders.

And if the above graphic is actually sound news judgment I will eat my hat.