The floods in Southland over the past few days were being reported as the biggest in 35 years. A state of emergency was declared mid afternoon on Tuesday and by Wednesday morning people were being evacuated. The rain had stopped but the rivers were set to peak later in the day.

In some areas people were being told to ‘get out now’ and the army were called in in the afternoon to help. One couple were arrested and removed from their property for trying to stay and save their animals. The main trunk line was closed with two freight trains having to be abandoned near Gore. Many farms are affected and the government has declared an adverse event allow the farming welfare fund to be released.

Media coverage was sometimes patchy, in part because of the large area that was cut off from access (all road access from Otago into Southland was gone) and apparently because few national MSM outlets have journalists on the ground in Southland. The ODT, Southland Times/Stuff, and RNZ had good coverage, others appeared to struggle,

I’m amazed by the lack of reporting. 4 towns partially (or fully) evacuated, displacing thousands of people, and most publications are sparse on detail, massively out of date, or just plain wrong. pic.twitter.com/GYiOHd69Ob

The other somewhat disturbing thing was the relative lack of visibility from central government. I know they were tied up with Waitangi, and Agriculture Minister Damien O’Connor flew down in the afternoon, but it was still odd to not see the government saying much. Nothing on twitter or Facebook from Labour or the Greens. Disappointing.

The inconsistent media coverage was even more obvious in the emerging story of the 10,000 tonnes of toxic waste from the Tiwai aluminium smelter being stored in the old paper mill on the banks of the Mataura River, that is at risk of releasing noxious gases on coming into contact with water. It’s a known hazard, and locals have been trying for years to get the stuff moved. Volunteers sandbagging the mill yesterday left suddenly and were not allowed back in.

University of Canterbury scientists said there was a plausible concern about serious toxicity to people and the environment. Gore District Council CE quoted in the Southland Times,

I can’t rule it out, we’re just doing the best we can.

We are definitely worried, but we are doing all we can do to make that building as resilient as possible.

There are no real measures we can take, we are going to have to react to what unfolds.

There was some confusion over the day about whether people in Mataura, where the whole town was evacuated and closed Wednesday morning, were told to leave because of the flooding or because of the risk of noxious gas. The low lying areas were obvious flood risked, but people on the hills had to leave too and a very large cordon was established around the area.

Civil Defence put out a statement mid afternoon “to quell speculation and misinformation about the ouvea premix at the Mataura paper mill”, but it left some questions unanswered eg how are they monitoring the toxic waste when they say “We have had no reports of any ammonia coming from the paper mill”. However one of the people sandbagging said they left because of the ammonia.

Several mentions of ouvea premix being stored next to the flooding Mataura River, and the problem it poses. Not one about where it came from, why, or the fight the locals put up to prevent this from happening.

Since the news stories don’t give any context, I had to look it up.

The smelter operators outsourced the remediation of the dross to a firm that apparently bid too low and went bankrupt.

Ouvea premix is less toxic than dross, but you have to keep the stuff dry. Its intended use was for addition to concrete and lime for foundations, and in this state it is apparently considered environmentally “safe.” On its own it is a pollutant.

Ouvea premix can also be used in the manufacture of phosphate fertilisers. But apparently no one wants to use it for that, so the former processor Taha Asia Pacific stockpiled thousands of tonnes of the stuff until it went belly up in 2016.

The liquidators managed to wash their hands of the sticky mess by saying “Not our problem” in Dec 2017. Magic.
https://whatsoninvers.nz/funding-confirmed-to-remove-ouvea-premix-from-four-sites-in-southland/
The tar baby landed squarely in the lap of local councils, residents, and central govt.

A deal was brokered in 2018 but nothing much happened. By mid 2019 the locals were tired of the can-kicking and again pressed for urgency.

One truckload (52 bulk bags) a fortnight is the schedule. At this rate the Mataura paper mill building will be clear by 2026. How many more climate chaos-induced exceptional rainfall events arrive in Southland in that time is anyone’s guess, but I’m betting it’s greater than zero

And what is Plan B? An “accident” at sea?

The whole saga reeks. Too much like many other environmental contamination problems in NZ…no attention to remediation in the initial consents. No clear chain of responsibility.

[post updated to fix missing tweets in the thread]

With locals understandably concerned, I’m hoping the MSM will pick up this story today, including where the various stores of the premix are and how well they are secured. I’d also like to know what’s happened to the bags sent back to Tiwai, how is it being transported, and what the medium and long term plans are for the ongoing waste being created by the smelter, as well as investigations into the alleged dumping of some of the waste. How secure are the other storage sites for another 12,000 tonnes around Southland?

And why the hell is it left up to residents to push for this to be sorted, instead of corporations taking responsibility for their own shit?

The Matarua River and old paper mill on a good day, 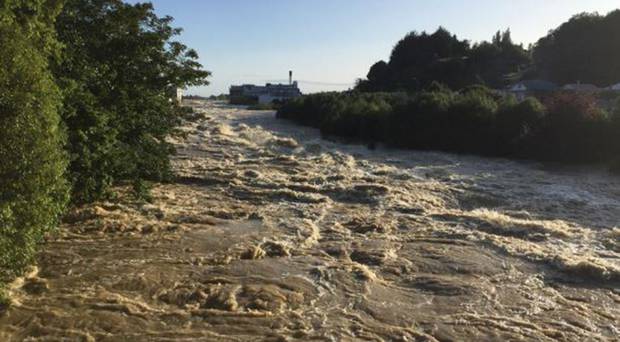 Front page photo: the Mataura River just upstream from the paper mill during the 1978 flood.