Spin-busting: ‘A growth problem, not a debt problem’

To justify borrowing for tax cuts, National’s new line is that New Zealand has ‘a growth problem, not a debt problem’. Untrue. 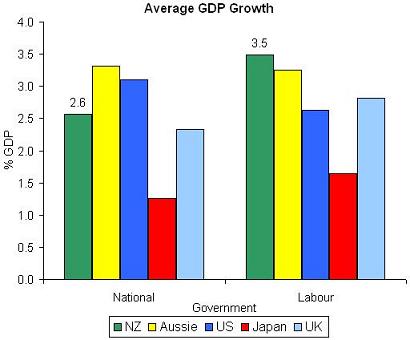 (source)
New Zealand’s growth has been faster in recent years than trend, faster than it was under National, and faster than growth in our major trade partners.

We are in a shallow recession right now but that’s because a) we’ve grown so quickly in the last 8 years that there is little spare capacity for growth in the economy and b) the world is experiencing the beginning of peak oil, that has put petrol prices to record prices, hamstringing the global economy, including New Zealand.

Moreover, National’s borrowing plan would not break us out of the present recession. It’s not roads we are short on; it’s invesmtnet in workers’ skills, a low-carbon transport infrastructure, and more private sector investment in private businesses that are needed. With our economy still basically at full capacity, all National’s borrowing will do is cause inflation.

We don’t have a growth problem: New Zealand has grown as fast as it could for the last decade leading to record-low unemployment and record high wage increases. National’s borrowing would not increase growth (more investment by private business in their capital would help, but business owners continue to prioritise profits over investment). So, we’re left with the real reason for National’s debt plan – to pay for tax cuts.

28 comments on “Spin-busting: ‘A growth problem, not a debt problem’ ”