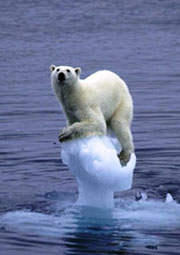 Now “PC gone mad” has been used to the point where even people who think mimicking Tui’s “yeah right” slogan is cutting edge irony wouldn’t be seen dead using the phrase, National has needed to come up with something else to do the job. Because let’s face it, you need to keep creating the impression the public service is woolly liberal claptrap so voters won’t complain when you start a slashin’.

Problem is the best National could come up with is “hug a polar bear programmes”. Say that out loud and you’ll hear the first problem. It doesn’t scan, it’s long and it’s not catchy.

Now have a think about it. Hug a polar bear. Everybody likes polar bears. They’re simultaneously cute and fluffy and powerful and tough. They tick all the boxes for cool. You wouldn’t want to hug one for real but the idea of hugging one is quite attractive.

But it gets worse. The only example Key gives for such “polar bears” is the carbon neutral public service policy. That’s just dumb. Nothing says “evil climate change” like the stories of polar bears facing extinction and by noting that carbon policy in relation to polar bears Key is only underscoring the fact that his government doesn’t care about climate change or the environment in general. D’oh!

Of course they’ll still cut perfectly good services but if they keep this embarrassingly poor level of spin up they won’t have softened the blowback one bit.

“Hug a polar bear”? That stinks John. Let’s hope you keep using it.