I’ve had a crack at working out how much we lose by cancelling the Cullen Fund contributions according to the Treasury’s figures in the Budget. I come out with a loss of $7.5 billion by 2023.

That’s a little lower than the figures Guyon Espiner was leaked, which were presumably based on more detailed modelling. The loss will just keep getting bigger after 2023 but that’s where Treasury’s debt projections end.

Hard to argue with Treasury’s numbers (although no doubt the thread will be full of righties doing just that). It really leaves the Right only one response: ‘But, but we couldn’t borrow that extra, we would get a credit downgrade.

No we wouldn’t have. Only one credit agency was even suggesting we might get a downgrade. Moody’s rated us one of the most secure AAA rated countries out there.

All we needed to do to avoid a downgrade was show a commitment to getting back into surplus over time and some fiscal responsiblity. Dropping the tax cuts was enough. Dropping investments in a fund that will generate huge returns over the long-run wasn’t going to impress them. Even if we borrow for the contributions,  the increase to our debt to GDP ratio isn’t large given it’s for a good investment in our future. Even with the added borrowing, our gross debt will start to track down within ten years. 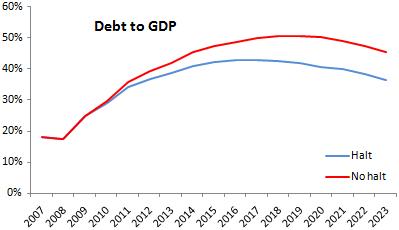