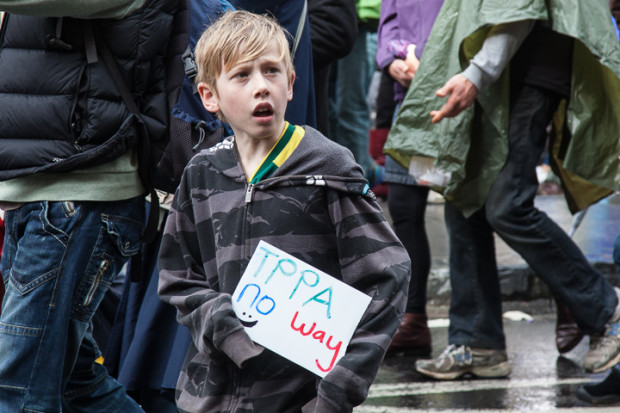 You know how Paris and COP21 was meant to mark a new beginning, that climate change denial was dead and that man made anthropogenic change was now accepted to be real and that to address this most important of issues urgent action needed to be taken?  Well no one told the people negotiating the Trans Pacific Partnership agreement.

The Sustainability Council has reported that the Trans Pacific Partnership Agreement will allow investors to sue the Government should it take steps to address climate change in a way that affects corporate interests.  And that references to climate change were washed out of an early draft of the agreement.

Close scrutiny of the final TPPA text reveals that its impact on the environment is even worse than had been expected from leaked drafts.

A new paper, prepared by Simon Terry as part of a series supported by a New Zealand Law Foundation grant, concludes that the environment is a significant casualty under the TPPA.

Analysis of the final text shows that the gains for the environment are few and small scale. By contrast, foreign investors can sue the Government for compensation if they believe new environmental protections will reduce their future profits, and this is a serious threat.

When challenged on the need for such Investor State Dispute Settlement (ISDS) rules, ministers have repeatedly said that there would be no restraint on the government’s ability to regulate in the public interest. However, the text fails to protect the Government from being sued when taking such action.

The justification provided by the Government is essentially weasel words.  Just as the TPPA would not result in increased prescription charges for individuals because the Government (that is the taxpayer) would pick up the tab and/or the quality of pharmaceuticals would go down, the government would have us believe that there will be no restraint on it being able to regulate, as long as it is willing to pay the cost of doing so.

The full report notes that there are provisions that protect governments from being sued for acting to reduce smoking but no similar protections when it comes to climate change.  Clearly the absence of these safeguards means that almost anything goes as far as corporate litigation is concerned.

The report refers to the legal action taken by TransCanada against US Government for the vetoing of approval of the Keystone XL pipeline and suggests that this is an example of what may happen under the TPPA’s investor state dispute resolution procedure.

Two weeks ago, a Canadian company announced that it will use very similar rules to sue the US government for US$15 billion after President Obama vetoed approval for a pipeline that would have carried oil made from tar sands to the US.

In this country, ISDS rules could be used to sue the government if it increased emissions charges under the ETS, or restricted the mining of fossil fuels.

And the report notes that “climate change” is not mentioned in the TPPA text, and that global measures to address climate change are completely disconnected from the treaty.  It is all about trade and nothing but trade and does not protect the Government from doing anything except for the limited exception relating to smoking.

To make matters worse apparently “climate change” was mentioned in an earlier draft but was taken out through the redrafting process.  This passage …

The Parties acknowledge that transition to a low emissions economy requires collective action.

How crazy that action a government takes to address the world’s most pressing environmental issue may result in it paying compensation to corporations that pollute.  And how bizarre that some of the most sophisticated nations in the world should negotiate a treaty which provides this result.