Is NZ’s fishing industry just a domestic version of the tobacco companies? And how much would that really matter?

I know that insane news out of America has become predictably ho-hum, but this week has been stunning. There is now a real risk that the Republican administration will break healthcare deliberately and burn their own people out of spite. That’s the level of right-wing politics in America.

Thank you Greenpeace, and specifically thank you Russel Norman and the crew of the Taitu, for taking to the seas to fight this little battle in the most important struggle of our age.

History clearly shows us that when people are economically stressed they turn to extreme action and extreme leaders. Economist Jared Bernstein argues that the Trump ascendancy is another example of this.

Ever widening inequality generates ever more astonishing statistics – suck up economics in action. The super-rich are laughing all the way to the bank.

Cutting research into greenhouse gases? With our emissions profile? Now? This can’t possibly be mere stupidity. This must be willful blindness.

I/S at No Right Turn: “the government is spending tens of millions of dollars a year paying these companies to destroy the world. It is absolute madness”.

Charity is illegal in Florida 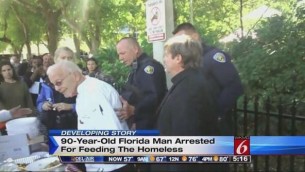 The cost of doing nothing

Another report confirms the findings of the 2006 Stern Report. The future economic costs of doing nothing far outweigh the current costs of taking action on climate change. But National is taking us backwards…