Pundits, most residing in the National Party, just three years ago predicted the economy would surf high on “rivers of white oil” flowing from the dairy industry, but they now have cow pats splattered on their faces as Fonterra today announced another payout downgrade and signalled liquidity pressures.

Terrible news for the 523 Fonterra workers who are losing their jobs – we wish you well.

Another disease of poverty making a comeback

Add another disease of poverty to the list of those that are making a comeback in NZ.

Milking a Land of Plenty?

NZ milk production has apparently risen by 30% since 2005. And, according to sources used by frenz.co.nz, back in 2006  over 14 billion liters of milk and 1.2 billion kilograms of milk solids (were) being processed by dairy companies annually That’s a lot of milk and associated dairy to spread around some four and a […]

Price of milk your fault

It turns out that the high price of milk is your fault.  No – really.

Chart o’ the day: got milked? 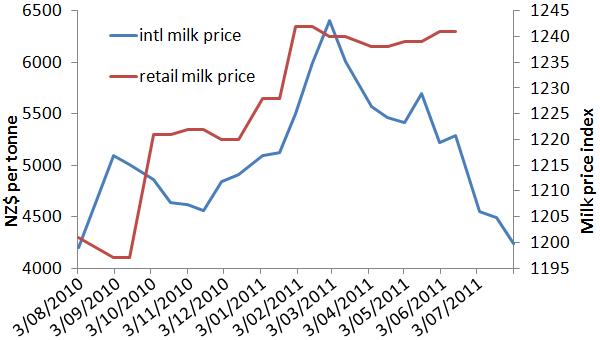 Can’t help but notice the international price peaked just when Fonterra put on their ‘generous price-cap’tm.

Our wages are so low that we can’t keep paying “international prices” for basic necessities.  GST off food is just tinkering at the edges.  We need more radical action.

Astronomical world dairy prices are to see the traditional champagne replaced with milk on motor race winners’ podiums around the globe next year. What started as a tradition in the Indy 500 back in 1936 will next year be extended to Formula One, the World Rally Champs and NASCAR. Super-heated liquid cheese was trialed briefly […]