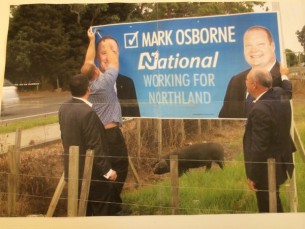 A sudden enthusiasm for local infrastructure projects on the eve of a tight by-election. What a remarkable coincidence! I wonder whether the cost/benefit ratios on these bridges are up to scratch? Last year National bribed people in the general election. OIA time

The National Government’s $212 million plan has Transport Minister Gerry Brownlee explicitly admitting that it is a massive pork-barreling for government MPs with public funds, and explicitly tells people to piss off if they don’t like it.

The extent that the National minister have been pork-barreling the roading budget for their electorates is crazy. The OIA’s show that most of the $212 million announced by John Key at the National party conference is pure pork for ministers. They are assessed as costing more money to build than they will ever produce in benefits, even using NZTA’s infamously overoptimistic assessments. National MPs and Ministers want to be seen as delivering something for their electorates before the election. So much for assessing needs based on merits. They must be really worried about this election to misuse so much pork.

National’s announcement yesterday of $212 million for 14 roading projects around regional New Zealand hits a lot of bad notes. I think it is a strategic mistake.  New Zealanders are not used to pork-barreling as naked as this. All but two of the projects are in National-held areas, and those other two are on National’s target list in September. And some are complete clunkers. For instance Nick Smith rerouting SH6 from the rich houses on to the kids going to schools

Louise Upston had a patsy for Transport Minister Gerry Brownlee about a bridge replacement in her electorate (the Nats have big achievements to crow about, eh?). Upston asked about the project’s benefits. Brownlee responded “First, I would expect re-election of the local member”. Now we know what National sees at those end of those highways to nowhere – swing votes.