Telecom and the logic of capitalism 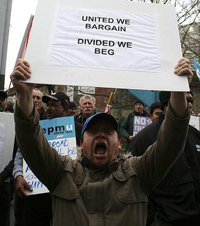 There’s nothing like a Tory Government in power and a monopolistic corporate flexing its muscle to remind you that capitalism is all about serving the bosses and screwing the workers.

This Telecom dispute. The engineers are being made redundant from their current roles already in batches. On October 1, all the jobs will be gone and the contract for servicing the network goes over to Visionstream. As the workers are being made redundant, Visionstream is trying to get them to sign up as contractors on worse rates than they get now and forcing them to buy all their own equipment. Cost of that is up to $60K. The catch? Visionstream is only offering 70% of the jobs that exist currently (they think they’ll be able to work fewer workers harder for less. Don’t expect to be getting prompt repairs if you have a phone or internet fault if Visionstream wins).

Of course the workers don’t want to take worse conditions for less money. That’s why Telecom and Visionstream’s strategy is so devious. By making them redundant in batches quite a way out from the changeover they’re really putting the screws on financially in they hope they’ll buckle. And each redundant engineer who breaks and signs up with Visionstream leaves a worse jobs to jokers ratio for the ones who are standing strong.

Forget the fairy stories you’ve been told about capitalism, in disputes like this bosses’ basic strategy is to sew fear in the hope it will lead to division. Make people fear they won’t be able to meet their mortgage and feed their kids, make them fear they’ll be left jobless in the middle of a recession, then try to divide them against each other by making them compete against their workmates for the few shitty jobs that are left.

As long as most of the engineers stay staunch, Visionstream are stuffed. But the bosses are counting on hunger and fear to do their work for them.

So far, the workers are winning. Few of the engineers have been buckled and signed up with Visionstream. Most of them are unionised and they know that together they can force Visionstream to break. Visionstream is desperate enough that they are lying, making claims to have signed up hundreds of engineers and threatening workers who won’t sign up, but the workers know it’s a crock. As long as they stand together, they have the power.

It’s a matter of holding the line until the bosses back down, which is why the donation of $10,000 from the Maritime Workers was so fantastic, and why you should get behind them by donating too. If the bosses break these workers, you could be next.

69 comments on “Telecom and the logic of capitalism ”