One of the John Key’s “tells” which indicate that he’s in the shit is how the nature of his lying changes. Most of his lies tend to be various forms of random, one-off dribbles stemming from the cold pool of contempt he has for the political system in general and the average New Zealand voter in particular. When the pressure is really on, however, John Key’s lies become more sophisticated and calculated,  usually appearing in clusters. A typical example of this is his cluster of lies surrounding the BMW issue which eventually culminated in one of his most repugnant lies.

That cluster of lies started with a silly dribble back in early 2010 before stretching out for nearly a year, each lie along the way only making things worse.  Now, with Crosby Textor at his side, John Key has really got into the swing of things. He has learned to employ all manner of specialist PR techniques including ad homs, blame-shifting, distraction,  use of proxies to defuse the situation, and false equivalence, all woven together in an intricately performed semantic shuffle designed to  provide wiggle room in case he does get caught. A recent and particularly Orwellian example of this is John Key’s defense of the GCSB’s international spying. The lies have been going on for years now and recently devolved down to his attempting to differentiate the term “collection” from, within the spying context, its concomitant term “surveillance”.

Emboldened by getting away with such tricksy manoeuvres for six long years, John Key and a smattering of his acolyte National Ltd™ ministers are employing these tactics in matters both large and small. This week, thanks to the sterling work of Rob Salmond, John Key’s Little Helper, Simon Bridges, was caught out breaching the Cabinet Manual by misusing his ministerial authority during the Northland by-election.

Its now becoming apparent that National Ltd™ knew it was sailing close to the wind on this. When the matter was raised, its first tactic was denial. Evidence for this is John Key’s point-blank refusal on 11 March to answer questions in Parliament about the Northland By-Election Bridges Bribe on the basis that he was speaking as Leader of National Ltd™ and not Prime Minister.  Watch here (if you can bear  The Speaker’s partisan bullshit) as John Key tells The House the Northland Bridges Bribe was about National Ltd™ policy . . .

Now, both John Key and Simon Bridges would have us believe the request for information and advice from officials was made legitimately on the basis that the information being sort was not advice but, rather, factual information that Bridges was entitled to as Transport Minister.

Simon Bridges has since gone to ground leaving his master to roll out the lies. So far, in this particular cluster, we’ve seen . . .

You are allowed to use the resources of the officials in terms of what would be Government policy.

As long as Simon Bridges didn’t get any policy advice from his officials about developing the “10 bridges for your vote!” bribe, then there’s no possible problem

under the Cabinet Manual. Labour did the same thing as Bridges when it used “officials actually in my opinion actually” to get policy advice as they did in the 2008 campaign with deposit guarantees

. . . five in row. How many more lies have Crosby Textor prepared for John Key on this little issue? On the other hand, perhaps National Ltd™ and Crosby Textor are hoping the current State Services Commission witch-hunt for those officials who should have known not to provide the information will produce some public servant heads to put on spikes.

What a sad situation for New Zealand.  This issue has stretched on for too long now. National Ltd™ knows any back down at this stage will only highlight the instinctive initial response and its follow-up orchestrated machinations to avoid accountability. All it would have taken for this issue to melt away, as John Armstrong pointed out, is if Simon Bridges would’ve admitted his fault and offered up a sincere apology. Mind you, when it comes to Simon Bridges, and National Ltd™ generally, sincerity is not exactly a strong feature. Nor is telling the truth.  Good to remember also that when it comes to apologies, the likes of John Key would rather apologise to Cameron Slater than, say, Tania Billingsley, never mind apologising to the wider New Zealand public which is seeing its Parliament reduced to farce. 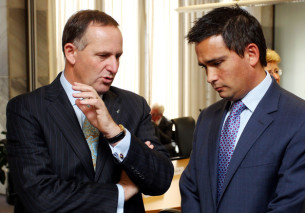 de Joux says to go for the confusion technique. I’ll play it as leader of the party and you say there was nothing wrong with a Ministerial request for data. And then stay schtum. Later on, we’ll nail the public service for it. Capisce?

18 comments on “Ten Bridges Too Far ”