We’re now experiencing the worst drought in the North Island in recorded history. It comes just five years after the previous severe drought and there was a lesser one in between. Let’s not beat around the bush, it’s climate change. Bill English came very close on Monday to admitting that climate change induced-droughts will make bailouts unsustainable.

Take a look at this first graph. The soil moisture deficit is the amount of extra moisture that would be needed in the soil before it was wet enough that it couldn’t hold more (and the water would flow through the soil into streams, through into rivers etc). The grass won’t grow if there’s much of a deficit. 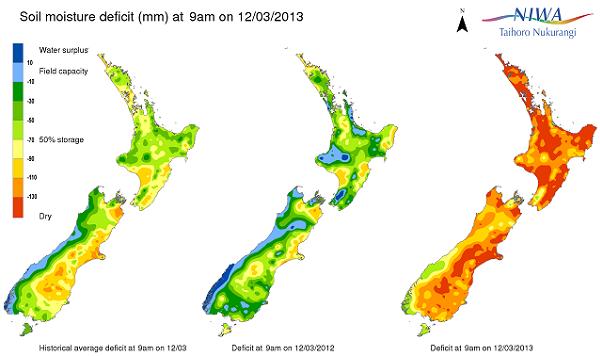 In vast swathes of New Zealand, the deficit is now literally off the charts. To get back to field capacity, those red areas need more than, sometimes much more than, 130mls of rain plus whatever amount is lost without being absorbed into the soil. Large parts of the country have seen less than 10mls in the past month.

And it’s not just the farmers. Our hydrolake system doesn’t have a hell of a lot of capacity compared to other hydro-dependent nations, which means we’re very sensitive to inflows. Late last year, the hydrolakes were being spilled because they were too full. Now… look at the drop-off in inflow. Half of the average for this time of year. 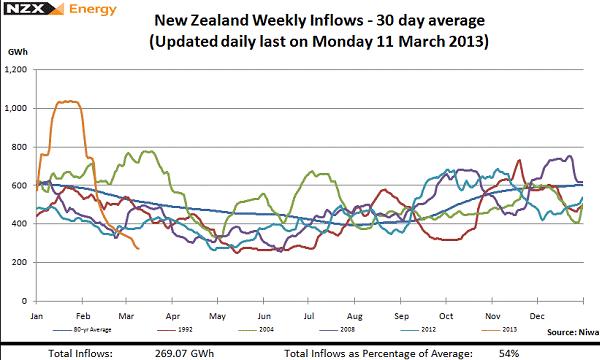 And, suddenly, with a sixth of the water that is usually in the hydrolakes at this time of year missing, it’s shaping to be a dry year unless rain comes quick and falls in the right places. 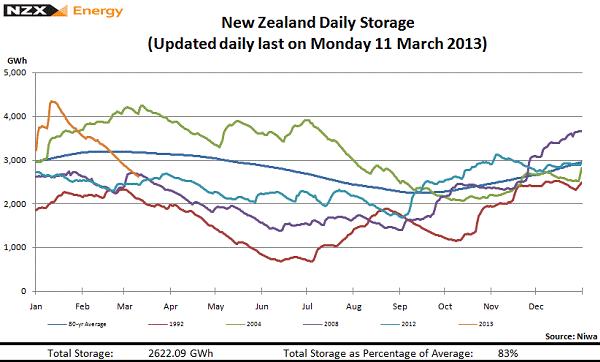 Unfortunately, the tail-end of Cyclone Sandra now looks like it’ll hit the West Coast and Fiordland, good for Manapouri and Te Anau which are at very low levels but missing the worst drought zones. Lake Taupo is rapidly heading towards the bottom of its operating level and, if that happens, it’ll be trouble. We’re already seeing higher spot power prices.

But the important thing is this isn’t just about this year. This is climate change, this is an accelerating trend of more extreme weather events- more droughts, more floods, more storms, more heatwaves. We’ve built our energy and agricultural systems around a relatively stable climate and now we’ve kicked it over on its arse for no good reason. And it’s we who will pay the price.