The enemy isn’t on your side

Politics 101 for Labour leaders: when a right-wing columnist tells you to piss off your party and your base to ‘win the centre’ she probably doesn’t have your best interests at heart. The truth of it is, Labour didn’t lose the last two elections by losing the centre and it won’t win by trying to win back votes from National. It’s the Labour non-vote that matters, and they have the same politics as Labour’s grassroots.

Here’s the graph of share of eligible votes in the last three elections. 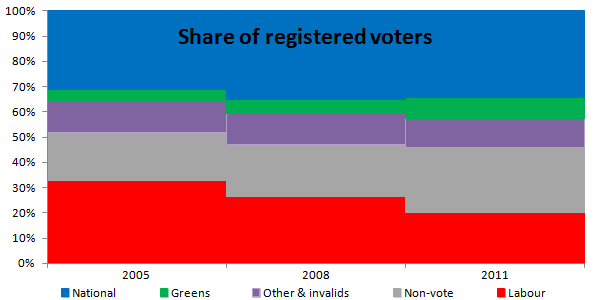 In the last three elections, Labour’s party vote has fallen from 33% of all registered voters to 27% to 20%. That is: last election only 1 in 5 people who were eligible to vote voted for Labour. Over 1 in 4 didn’t vote at all (I’ll return to that).

Those votes didn’t all go to National, not even nearly. Their share of the registered vote went from 31% to 35% to 34%. In the last election, National’s share of the eligible vote went down so Labour didn’t lose votes to them… especially not in 2011.

So, basically, it nets out that a majority of Labour’s lost vote share has gone to non-vote. Last year, that’s where all of it went… it might be a bit less than that if you assume that they lost some to the Greens, which was balanced out by National non-vote, but the point’s clear: most of the votes Labour has been lost has been people who didn’t vote at all, not people who went to National. Labour will not win by trying to win votes back from National because that’s not where they went.

The inescapable conclusion is that the Labour non-vote – the people Labour must win back – don’t want Labour to be more like National. They don’t want a weak Blairite third-wayist Labour that talks big on jobs and equality but clearly doesn’t believe in a repudiation of neoliberalism and doesn’t match their criticism of the government’s status quo with a real alternative. They didn’t believe Goff because, fundamentally, Goff didn’t believe Goff. And they don’t believe Shearer because Shearer also gives the impression he doesn’t believe himself. (Key believes Key. He knows he’s lying but he believes in the objectives he’s lying in aid of). The Labour non-vote wants a Labour worth voting for.

And who best represents the Labour non-vote? The Labour grassroots. The disaffected Labour Ulterior who want so so desperately for Labour to be a party to be proud of. The Labour activists who work their arses off in those communities were all those people have stopped voting Labour and stopped voting altogether.

[And speaking of enemies not being on your side. I love the Herald’s advice to Labour: wait 5 years, then National will get themselves turfed out. It even claims there is nothing the Opposition can do to affect the popularity of a government (a bit like those righties who say the government can’t influence jobs and wages but also say National’s best for the economy). Yeah, I bet their owners would love another 5 years of National, uncontested by the Opposition]