The Essential Forest-Gardener – in the end…

When we first bought this parcel of land, it was a forest of sorts; mostly broom and gorse, that pair of so-called pest-plants that irk farmers so much, with patches of blackberry and cocksfoot grass, but precious little else. Now, it’s a far more complex collection of plants that provide opportunities for all manner of organisms to flourish; the soil supports a multitude of life-forms, bacterial, crustaceous, moluscoid, arthropodic, arachnoid, insectal, vegetative, fungal to name but a few. The above ground matrix of trees, shrubs, vines, herbs and so on host a further collection of organisms, some attractive to humans and others not. The garden is stopover for creatures with feathers and fur, winged and clawed and those who wear clothes. Compared to the pasture that is spread out over the farm next door, our environment is thrumming with life and diversity.

I’ve seen tremendous change to the hectare or so we call home and am well pleased with the decision we made to try our hands at a different approach to land stewardship. It is however and most pleasingly, not over yet. The days, weeks, months and years ahead will be even more interesting than those that brought us to this point and that’s because of where we now find ourselves, philosophically. Much has changed in our approach to how we do things out of doors. At the start, we worked to a plan, one we’d drawn with pencil and paper, that was designed to achieve certain things; create shelter from the prevailing sou’west winds, derive maximum benefit from the sun, fit in with the slope of the land, the flow of the stream that wound along one edge, the artificial boundaries of farm fence and the road that carried traffic past on our eastern side.

We read about and applied ideas from the school of permaculture, avoiding the cliches wherever we could; we have no mandala garden or swale, and leaned heavily toward a wilder version of any known gardening practice. We’ve got there, I believe, and there are few visitors who say, “Not very wild, is it”. In fact, none do. It’s pretty wild and wildly pretty.

From here on though, I plan to loosen the controls even further, and let the forest garden shape itself. It’s doing that already, truth to tell, and my plan is to keep even further out of it’s way while it does it. I’ll still plant. I can’t help myself, especially when I’ve found something that’s new and fascinating. I’m not a good customer at garden centres, as I never buy, just look and plot. If I can’t grow something from seed or slip, I’m willing to let it pass until the time when I do stumble across the open source, free version that I can pop into the soil and have grow.

Pruning fruit trees, or rather stopping the practice, is challenging, but not impossible. I can see our 80 or so apple trees, becoming the canopy once I’ve stopped cutting them. There will be a change to their productivity, most likely, but they produce far too much fruit now and the volumes are increasing year after year. I’ll not net either, letting the birds have what they need and timing my picking better, watching for their signs of interest and harvesting when they show, rather than later. I’ll still be cutting scions from the plants that other people might like a copy of; apples, pears and plums that we collected from the old orchards, unusual fruiting trees that I’ve picked up from other gardens over the years, plants that attract butterflies and bees that when planted beyond our own boundaries will enhance the populations of those wonderful insects for the benefit of everyone and quirky personal-favourites like the Fengu’s Fan that I have growing amongst the understorey below the native trees for no reason other than it delights me.

My approach, and I like to think it’s a mature one, has become to greet every challenge encountered in the forest garden, with a practice that adds life to the situation, rather than takes it away. Instead of clearing, cutting and chopping at plants I don’t want to occupy too much space, I’ll add some competition for them, by casting seed or setting out cuttings of plants that will make the so called weed, take its place and only its place in the garden.

Where there are insects that might spoil a crop I favour, I’ll bring in other insects that will harvest their crop-eating brethren and that’s easily done by planting something that attracts them. If I stumble across a plant or any organisms at all for that matter, that I react to negatively and believe I need to destroy, I’ll think again, ponder on my thinking and try to re-jig my world view to this add-rather-than-take philosophy. I’m confident that this is a natural approach that’s been tested for a very long time, certainly longer than I’ve been scratching around on my patch of soil, and is one that will satisfy all of our needs.

When I retire, and that’s something that’s going to involve a good deal of light-footed wandering about in the forest garden, rather than pushing a wheelbarrow or hand-mower, I’ll be thankful that I had the opportunity to try stepping back from what was expected of me as a gardener and instead having a go at letting the garden-that-became-a-forest, shape my thoughts and actions.

I’ll nibble leaves and fruits as the desire arises, brachiate in an orangutan-like fashion if I’m still able, collect and store nuts, pad about on the spongy forest floor and scatter seeds wherever there’s a pool of sunlight decending through the leafy canopy. If all goes to the loosely woven plan I’ve fabricated in my mind, my children and their own offspring will be in there with me, doing much as I’m doing, only with more spring in their steps. I recommend forest gardening to anyone and everyone who would enjoy to do the same. 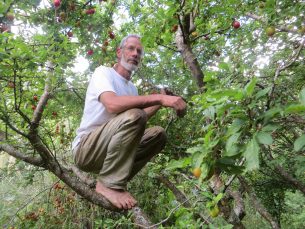 32 comments on “The Essential Forest-Gardener – in the end… ”