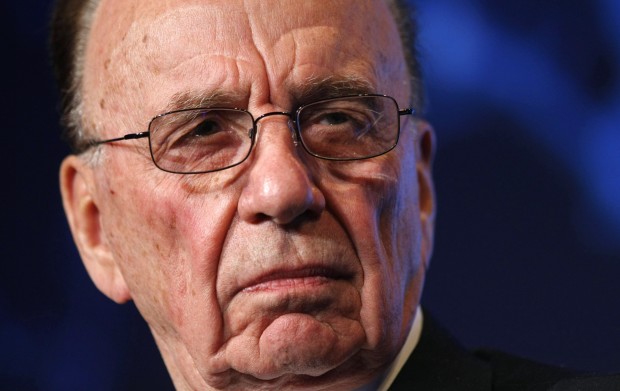 Reprinted with permission from the Failed Estate.

Now Murdoch’s media has abandoned claims of a connection to actual journalism and shark-vaulted into the Trumpian post-truth void, we can set aside conventional media criticism and marvel at the death-throes desperation of its ‘yarn’-spinning.

No longer content to merely feed today’s news through the standard News Corp grinder and pack it together with the usual ideological offal, the Daily Telegraph’s fact butchers are now manufacturing the meat altogether. This new ‘news’, like the cheapest sausage, is injected so full of sodium and carcinogenic chemicals it bears no resemblance to anything close to real life.

With a now soulless Liberal Party in the grip of autophagia, the spectral Abbott haunting Turnbull’s prime ministerial banquet like a bloodied Banquo rattling a set of rosary beads, and the Labor Party, slowly marching Birnam Wood-style upon Dunsinane, the Tele preferred to focus its front page on two years’ hence and predictions of a new, more terrible tyrant in, err, Bill Shorten.

Honestly, you couldn’t make this up, except they just did. Imagine, for a moment, The Washington Post setting aside the Watergate inquiry while they projected three years into the future to a Jimmy Carter-led dystopia, one that threatened the long-suffering American people with a reign of competency and compassion. Oh, the wailing and the gnashing of teeth.

This surely is yet another symbol that News Corporation, the loss-making, fact-shedding news media detritus of Murdoch’s once mighty empire (21st Century Fox being the profitable and much bigger business) is in its final, feeble days.

Just look at it: The octogenarian head of the Family Firm is revelling in his role as the new handbag (alligator skin) of super groupie Jerry Hall (Jerry and the Pacemaker). Son Lachlan here in Australia is purely focused on taking control of the Ten Network in the quite reasonable anticipation that federal parliament will change media ownership laws for his benefit. And the other son James has put that whole unfortunate phone hacking scandal behind him by lobbying Teresa May’s mortally wounded minority government to let Fox take control of the UK’s Sky Television.

Is it any wonder, then, that the old, decaying and increasingly irrelevant print legacy assets are being left to their own murky devices. Over at Times Roman Catholic broadsheet The Australian, battalions of crusty old cranks fulminate about climate conspiracies and pearl-clutching matrons fret that our godlessness will be our destruction (Donald Trump being the exception, of course).

But the tabloids have to work that much harder to convince their supposedly blue-collar market to vote against their own interests. So we hear that Shorten will lift corporate taxes and bring back penalty rates if elected. Golly, what a vote loser that’ll be in Western Sydney (“We’re for the West”).

It used to be infuriating this stuff. But now it seems rather desperate and clearly workshopped (and photoshopped) to within an inch of its life. And the best part is that it isn’t working. The myth that Howard’s blue-collar Tories would stick with having their livelihoods destroyed so long as those in power were brutalising refugees, Aborigines and the unemployed has lost its magic. Victorians and Queenslanders ignored the tabloid lies in state elections and we saw in the UK the spectacular backfire by The Sun and the other truth-manufacturing UK tabloids to halt Jeremy Corbyn.

So now, they’re resorting to not just spinning today’s news, but faking up the future. It’s low, it’s desperate, it’s tawdry and it has absolutely nothing to do with journalism or the truth.

Which is why the toilet paper that is Murdoch’s tabloids is set to be flushed. And for good this time one would hope.