The failure of economic austerity

I know, I know, I’ve written about the failure of economic austerity before, like a broken record. But the evidence just keeps getting clearer and clearer. Paul Krugmann makes the case in his recent “Looking for Mister Goodpain“:

Three years ago, a terrible thing happened to economic policy, both here and in Europe. Although the worst of the financial crisis was over, economies on both sides of the Atlantic remained deeply depressed, with very high unemployment. Yet the Western world’s policy elite somehow decided en masse that unemployment was no longer a crucial concern, and that reducing budget deficits should be the overriding priority.

In recent columns, I’ve argued that worries about the deficit are, in fact, greatly exaggerated — and have documented the increasingly desperate efforts of the deficit scolds to keep fear alive. Today, however, I’d like to talk about a different but related kind of desperation: the frantic effort to find some example, somewhere, of austerity policies that succeeded. For the advocates of fiscal austerity — the austerians — made promises as well as threats: austerity, they claimed, would both avert crisis and lead to prosperity.

And let nobody accuse the austerians of lacking a sense of romance; in fact, they’ve spent years looking for Mr. Goodpain.

Krugman then traces the history of failed austerity programmes in Ireland, Britain and (of all places) Latvia. He concludes:

So what do we learn from the rather pathetic search for austerity success stories? We learn that the doctrine that has dominated elite economic discourse for the past three years is wrong on all fronts. Not only have we been ruled by fear of nonexistent threats, we’ve been promised rewards that haven’t arrived and never will. It’s time to put the deficit obsession aside and get back to dealing with the real problem — namely, unacceptably high unemployment.

A follow-up piece by Gaius Publius has a title that really says it all – “No Austerity Has Helped Any Economy“. But Publius makes the point that there is actually a success story here – if you happen to be in the 1%:

Publius calls the tiny minority who profit the “Baronial class”: 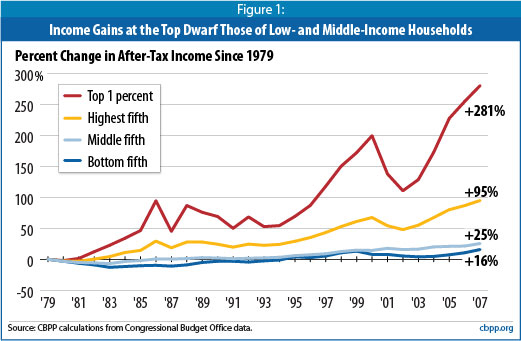 The Predator Class in action. If you added the Top .001% to this chart, it would have to be taller than you are.

If you added the Top .1%, the Top .01% and the Top .001% to that chart, you’d need a chart as tall as your room. What the chart calls the “Highest Fifth” includes what I call the “retainers” — administrators, enablers (that’s you, CNN producers) and professionals needed to keep the system working. Everyone else is workers, and look what their hard work got them. …

This is what James Galbraith calls “the predatory state” — and he means that economically. The predatory state is a state that enables and is controlled by economic predators, extremely wealthy vampires who feed on their fellow citizens.

And, sure enough, in NZ the Nats’ austerity cut cut cutting has left the economy stagnant, inequality on the rise, and the super rich getting richer. Welcome to the brighter future.

18 comments on “The failure of economic austerity ”