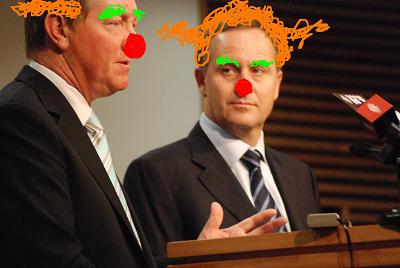 Yesterday John Key spent most of the day saying that the Crown’s legal advice was sound, and that as it wanted to use the land for social housing it did not have to offer the land to Iwi under the treaty settlement reached with Ngāti Whātua and Waikato-Tainui amongst others.

This morning the Herald has reported that one of the pieces of land which Nick Smith showed reporters on his magical mystery bus tour had actually been offered back to Iwi.

One of the surplus land holdings in Auckland shown off to journalists in May as available for the Government’s affordable housing partnership with private developers had already been offered to iwi under right of first refusal, the Heraldhas learned.

The limited partnership to which it had been offered comprises, in part, Ngati Whatua, which Prime Minister John Key claims has no right of offer of first refusal.

Ngati Whatua and Waikato-Tainui confirmed last night that they would ask the High Court to clarify the Crown’s interpretation of right of first refusal.

Mr Key said at his post cabinet press conference yesterday that there was no existing case on which Ngati Whatua could go to court to test the principle of right of first refusal.

But surplus land in Moire Rd, East Massey, which was in the process of being disposed of may provide a case.

Is this yet another case of Key over stating the Government’s position?  He was quoted yesterday as saying:

The government is very sure of its legal position, and that is it’s quite entitled to use existing government land for a stated government purpose, which in this case is the provision of housing. We’ve done this before, it’s not new …

We don’t think the government wanting to provide housing on existing government land triggers a right of first refusal.”

And you have to wonder why the Government would claim that it does not legally have to give Iwi an option when that is precisely what it has already done with regards to one of the pieces of land.

Maybe this is another example of Key’s claim that with lawyers he can always provide one that holds a contrary view.  Maybe this is further evidence of Smith’s incompetence and his failure to be on top of the issues.  It certainly makes you wonder at Key’s claim yesterday that the plans for the four developments was “conceptual“.