American politics terrifies me. The more observant Americans have been, for some time now, seriously asking whether the country is sliding into fascism. The seriously dangerous Tea Party movement (and its insane anti-Obama lies) is gaining momentum. Demagogues have way too much power.

Now we have “the ground zero mosque” as the latest focus of and flash-point for deranged American right wing anger. The Guardian’s Charlie Brooker explains:

Millions of Americans are furious about the ‘Ground Zero mosque’. But it doesn’t exist

Things seem awfully heated in America right now; so heated you could probably toast a marshmallow by jabbing it on a stick and holding it toward the Atlantic. Millions are hopping mad over the news that a bunch of triumphalist Muslim extremists are about to build a “victory mosque” slap bang in the middle of Ground Zero.

The planned “ultra-mosque” will be a staggering 5,600ft tall – more than five times higher than the tallest building on Earth – and will be capped with an immense dome of highly-polished solid gold, carefully positioned to bounce sunlight directly toward the pavement, where it will blind pedestrians and fry small dogs. The main structure will be delimited by 600 minarets, each shaped like an upraised middle finger, and housing a powerful amplifier: when synchronised, their combined sonic might will be capable of relaying the muezzin’s call to prayer at such deafening volume, it will be clearly audible in the Afghan mountains, where thousands of terrorists are poised to celebrate by running around with scarves over their faces, firing AK-47s into the sky and yelling whatever the foreign word for “victory” is.

When I heard about it – in passing, in a soundbite – I figured it was a US example of the sort of inanely confrontational fantasy scheme Anjem Choudary might issue a press release about if he fancied winding up the tabloids for the 900th time this year. I was wrong. The “Ground Zero mosque” is a genuine proposal, but it’s slightly less provocative than its critics’ nickname makes it sound. For one thing, it’s not at Ground Zero. Also, it isn’t a mosque.

Wait, it gets duller. It’s not being built by extremists either. Cordoba House, as it’s known, is a proposed Islamic cultural centre, which, in addition to a prayer room, will include a basketball court, restaurant, and swimming pool. Its aim is to improve inter-faith relations. It’ll probably also have comfy chairs and people who smile at you when you walk in, the monsters.

To get to the Cordoba Centre from Ground Zero, you’d have to walk in the opposite direction for two blocks, before turning a corner and walking a bit more. The journey should take roughly two minutes, or possibly slightly longer if you’re heading an angry mob who can’t hear your directions over the sound of their own enraged bellowing.

… 70% of Americans are opposed to the “Ground Zero mosque”, doubtless in many cases because they’ve been led to believe it literally is a mosque at Ground Zero. And if not . . . well, it must be something significant. Otherwise why would all these pundits be so angry about it? And why would anyone in the media listen to them with a straight face?

According to a recent poll, one in five Americans believes Barack Obama is a Muslim, even though he isn’t. A quarter of those who believe he’s a Muslim also claimed he talks about his faith too much. Americans aren’t dumb. Clearly these particular Americans have either gone insane or been seriously misled. …

Misled by who I wonder? The usual suspects. Other groups that should know better. All wrapped up in amazing hypocrisy. Yeah – American politics terrifies me. 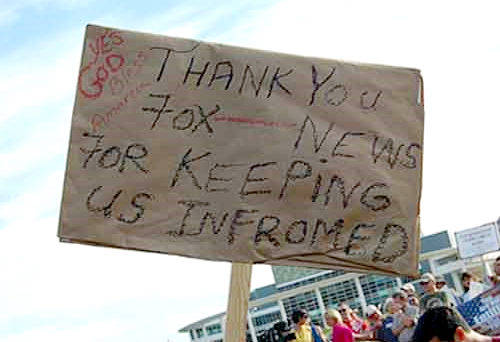 31 comments on “The ground zero mosque ”