The house built on sand

English, now known by the moniker Double Dipton, has decided to give back half the amount to has rorted so far from the taxpayer. Rather than claim the full ministers’ allowance, he’ll pocket ‘only’ $24,000 a year for living in his own family home, thank you very much. His claim that he didn’t know he could charge us less is an out and out lie. If it weren’t it would be a display of gross incompetence.

He’s not off the hook. This has always been an issue primarily of claiming an allowance he shouldn’t. The quantum of what they are claiming is of secondary importance. It doesn’t do that English has decided to halve the amount he is rorting. It is the fact of the rort that is the problem.

There’s also new questions about why he declared ownership of the farm in Dipton when in fact he part owns a company that owns (perhaps among other things) that farm, and why he is registered at different addresses as director and shareholder of that company. Sloppy paperwork at best from the man running the country’s finances.

Still, interesting that he suddenly switched positions on the money. Tuesday it was ‘move on’. Wednesday ‘OK, you can have half back’. Pressure behind the scenes has done that.

Some evidence is leaking out. Whaleoil (who’s involved in all National’s strategy, for some reason) has called for English’s head – that doesn’t come from nowhere. Neither does the change in behaviour that Mallard is reporting from the House. Old English loyalists suddenly rushing over to talk to Joyce, Key’s right-hand man and odds on replacement Deputy PM. 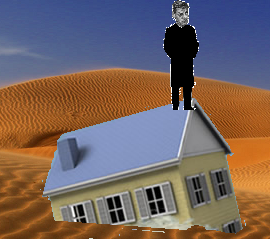 Could he be for the chop? Probably not right now. Key is generous with the final chances. But English has already had his fair share. Last year he gave us lines like “eventually but not now” on privatisation and “winning is everything … despite the highly principled statements”, which cost the Nats 5% in the polls. Now he’s at the centre of another scandal making his party look opportunistic and unprincipled. No wonder he’s suddenly backed down.

But his greed is still outweighing his nous. Until he stops rorting us altogether, Double Dipton will keep on bringing his party grief.

26 comments on “The house built on sand ”