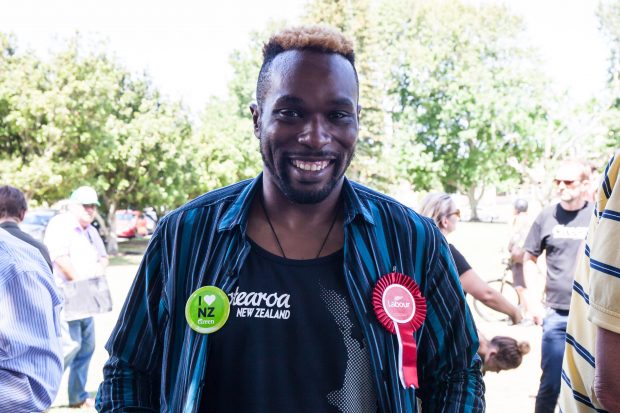 I attended the joint Labour-Green state of the Nation launch yesterday in Mt Albert and it was impressive.

It is clear that the senior staffers in both parties have put a great deal of planning and effort into the launch and it worked well.

The speeches neatly dovetailed into each other with Metiria’s speech providing the perfect introduction to Andrew’s speech.

Sacha accurately identified the most important passage of Metiria’s speech:

I was touched by this explicit and generous declaration of MMP intent from Metiria’s speech, and by the mutual respect of the two parties’ supporters in the room as well as on the stage:

“That’s what we – myself, James, Andrew and Annette are going after in 2017. That’s why the Greens and Labour have signed the Memorandum of Understanding.

To see our parties, the Greens and Labour working together to deliver for our children, our communities, our environment.

So, let’s all make this commitment together …”

Andrew’s speech broke with recent tradition in that it did not include any new detailed policy giving National no ability to go through and pick holes in and misrepresent as has occurred in previous years.  And it was also deeply personal and gave an insight into the sense of mortality his brush with cancer gave him and the fear that he has for the world that his son is growing up in.  It was compellingly personal and part of the process where his personality and thinking have to be displayed to the public.  More please.

The media response has been overwhelmingly positive.  Paddy Gower described the launch as having the best left vibe in years.  He said this:

If it is “all about the vibe”, then the Labour-Green alliance has nailed it from the outset of election year.

My first question after seeing them onstage together at the joint State of the Nation was, “What took you guys so long?”

The vibe at the Mount Albert War Memorial Hall was the best I have seen on the Left for years.

They both looked better together. But the most important thing was that it felt real.

Audrey Young in the Herald was also very positive about the event and about Little’s performance.

He sounded confident and polished. His message was a mix of oppositional attack and inspirational rhetoric. And the crowd went wild.

So the parties’ future are now linked.  In the past couple of elections suggestions by Russell Norman late in the campaign that the Greens could go with National in my opinion have hurt both Labour and the Greens.  The last time the parties campaigned together was in 2005, the last time that a progressive Government was elected.  Hopefully this year will repeat that event.