NZ Herald top managers and editors probably think the Fourth Estate is a planned new greenfield development on the outer margins of Auckland: a Dickensian kind of space where people poorly paid wage slaves and those on social security, can be hidden away from wealthy property owners and business people who have colonised the inner suburbs of the city. The Herald‘s bosses certainly don’t seem to honour the Fourth Estate aims for MSM.  A vigorous Fourth Estate would encourage, rather than stifle, critical debate of significant political and social issues, with diverse views being given equal weight.

The NZ Herald seems to be already campaigning to Auckland backwards to a National Party-backed Mayor and council. They are providing a distorted picture of the well-considered plans that provide guidelines as to what developers and home builders will be able to do in the future.  The plan to cater for a growing population is realistic, necessary and proactive.  It will ensure that the city doesn’t sprawl endlessly into suburbs with inadequate infrastructure.  It will ensure that unbearable strain isn’t added to the already struggling transport infrastructure.

The AUP doesn’t mean unsightly tower blocks will be springing up all over the city and on the boundary of every quarter acre residential property.  As explained by Matt L on the excellent Auckland Transport Blog, the plan sets a high bar for development, ensuring any new housing or apartment blocks are situated appropriately in relation to the surrounding community, and its services, landscape and infrastructure.

The AUP provides a blueprint for developing a livable, community-focused and potentially exciting city.

The NZ Herald has recently published a succession of articles undermining the Auckland Council’s Draft Unitary Plan, as highlighted by Matt L on the ATB on 26 April. Matt’s post begins:

One of the things that prompted me to write a post explaining why I want intensification in my neighbourhood was due to the seemingly one sided debate coming out of our major newspaper. It seemed almost every single article that discusses the Unitary Plan had a negative slant to it and I can only recall seeing one story even slightly balanced. Since that time this negative trend has continued and I’m interested to know why. …

I have even some of them asked through twitter to provide some balance but so far all we hear is silence then more one sided articles.

Matt critiques a series of articles that were published under the following titles:

‘Not in my back yard’

And Matt identifies only one article that is remotely positive about the plan:

On 27 April Stu Donovan, an Aucklander still at heart though living in Brisbane, posted on the Auckland Transport Blog o, asking if the NZ Herald is whipping up fear about the AUP.  He began describing what he loves about Auckland, with his trips home always being a pleasure.  he then counters the NZ Herald scaremongering about “multi-storey” buildings.  Stu shows examples of the the inspiring times of buildings seen overseas, such as this one: 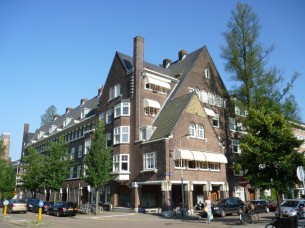 On Monday, Campbell Live provided a more balanced and forward-thinking consideration of the AUP.  It shows there will be many positive changes making for a more compact city.

Changes in cities always do bring a sense of loss for some people, but they also open up new opportunities and possibilities for exciting experiences.  Mt Eden is no longer the mixed-class microcosm that it was when I grew up there. It has moved upmarket with the inflation of house prices, and the increased competition for living near the CBD.  Like many Aucklanders, I no longer can afford to live there.  Like many others in the outer suburbs, I experience traveling across the city, to be an increasing hassle, with public transport being the best option.

The NZ Herald also has had it’s share of articles opposing the City Rail Link, though not as consistently and vehemently against it as the articles on the AUP.

With the Auckland Council elections coming up later this year, I hope the NZ Herald will start providing more balanced coverage of Auckland issues. Auckland does not need some corporate-backed, National Party stooge as Mayor.  So I hope that today’s article about the possibility of Maurice Williamson running, is not a sign that the Herald will be all for a National Party backed candidate while constantly running down Len Brown.

Mind you, like John Banks, Williamson would not be a shoe-in.  As Martyn Bradbury says, one good speech on gay marriage, doesn’t wipe out Williamson’s long record of waging war on the poor and of his “deep hatred of public transport”.

Len Brown hasn’t been great on issues like the Ports of Auckland dispute.  But the draft AUP and his transport proposals are better than anything that a National Party-backed candidate would do once installed into Rodney Hide’s un-democratic super-city hierarchy.

In the Council elections, it’s also important that there are as many successful progressive/left wing candidates as possible for the local boards.  I’m hoping that the MSM gives this part of the election more and balanced coverage as well.