‘Tis the season for surveys of the parties. Greenpeace sent a questionnaire to each of the parliamentary parties asking for their polices on 20 climate change issues. They’ve published the answers and rated the policies for effectiveness tackling climate change. The results are summarised below. Parties could score up to two ticks per answer if they had a good policy or two crosses if their policy was bad for climate change (giving a a maximum of forty). 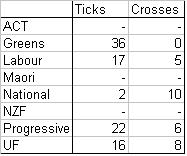 As you would hope, the Greens performed very well. The one four points on which they did not receive full marks are points on which reasonable people can differ such as whether coal can have any sustainable role in energy generation. The Progressives also performed well, a welcome surprise, given their slightly old-Left image. Good to see United Future has dropped its denier position of last election and gained a middling score.

Both the major parties disappointed. Labour’s policy towards climate change is simply too timid. Fortunately, they are working closely with the Greens on government policy. National’s new â€˜blue-green’ stance is completely exposed as completely hollow politicking. They couldn’t even be bothered answering the questions directly: National directed Greenpeace to a couple of old speeches and policy papers. If anyone still seriously thinks the Greens and National could work together, this survey should dissuade them.

Unsurprisingly, ACT did not bother answering the survey. Even in yesterday’s debate, Hide was completely out of touch, denying climate change. It is more disappointing that NZF and the Maori Party, especially, could not respond.

Climate change is the most serious threat, along with its twin Peak Oil, to our continued prosperity. The parties need to get more serious about it.