OK, one last graph for the year.

The latest GDP data isn’t pretty, a 0.4% contraction of the economy in the September quarter. It’s the third quarter of contraction in a row driven by the drought, oil prices, and the credit crunch. The ongoing international financial turmoil means we are likely to continue in recession well into next year. Still waiting on that plan to turn things round. Guess the Nats are too busy approving the killing of more endangered sea lions.

Now, I know the thread off this is going to be one long blame game. So, here’s something to ponder – GDP per capita from 1987 to now. 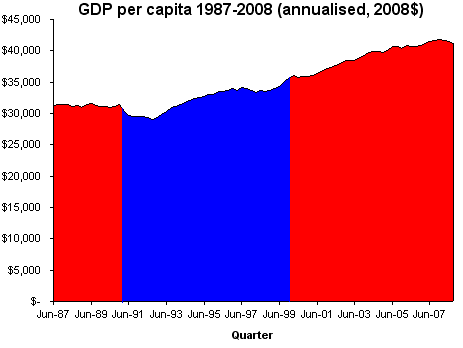 Gives some perspective. While the economy is contracting it has been pretty shallow, especially compared to the 90s recessions. We’re still better off on average than in 2006.

But remember, too, that it’s not just the size of the pie, it’s how it is cut up. As we’ve seen, workers get a smaller slice under National’s anti-worker policies.

With a continuing recession, rising unemployment, and an anti-worker government attacking wages, she’s looking like a tough year ahead for ordinary Kiwis.

Not sure that John Key giving himself a hundred dollar a week tax cut is going to help much, either.

[for a fuller explanation of the graph to the left, see this post. Bascially, circle is the size of the economy in 1991, 2000, and 2008, and the red sector is the portion of GDP going to workers]

42 comments on “The recession, graphically ”