The Speech From The Throne 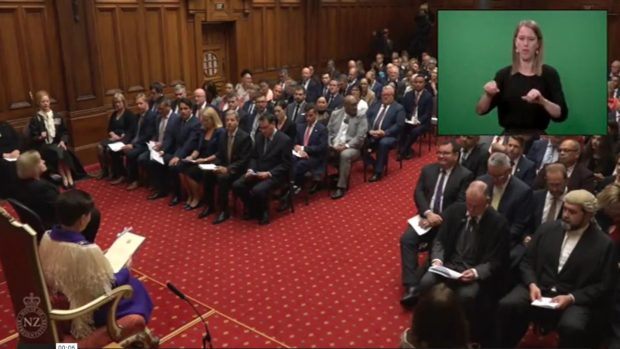 I’m sure one needs a particular depth of political nerdiness to give a flying fig about such things, but since I am one of those, these are my highlights from the speech from the throne this week:

New Zealanders voted for stability and certainty at the election.”

From that sentence you are set up for non-inspiration and non-target governance. Curious then that in the next sentence it is clear that this is indeed the crisis as big as the Great Depression of nearly a century ago, when they used that social license to do the big stuff that built our modern nation.

The point however is that compared to the rest of the world we trade and engage most with, we’ve bought ourselves about a years’ worth of breathing room:

The global outlook continues to worsen. New Zealand will not be immune to these deteriorating conditions”.

So the ideological code from the Government is this: transform nothing, strengthen the state and its redistributive services, regulate little, prepare this little and non-rich country instead for more shocks and for the world to get worse. So all of you keep it real tight and don’t expect too much when we are mostly busy just keeping the entire show together.

Not surprising then that there are three overarching objectives:

To accelerate our economic recovery

To lay the foundations for a better future”

Not unreasonably, the Government laid out the successes of managing the COVID19 issue. They are still planning for quarantine free travel zones with the Cook Islands, Niue, and Australia. No promises or timetables though.

I was curious that there was no hint that NZDF would be re-oriented in future to have greater preparation to respond to similar kinds of crises – particularly in partnership with the health system.

In terms of our economic recovery, again with some justification the Government said they have been effective in what they’ve done already, and will do what they said in the 2020 manifesto. They are clear that “the global picture is bleak”. So the foils of the good ship New Zealand are in the form of billions and billions of domestic spending on infrastructure: $42 billion of it. Roads, rail, schools, hospitals, waste reduction, ferries, ports – anything needing concrete and steel. And the re-training to get more people working on that. More a deep, heavy keel than an ETNZ foil then.

They are giving Waka Kotahi $9.6 billion not only to reduce congestion and travel times, but also to “open up new areas for housing, and increase choice, including safer options for walking and cycling.” If any of you have been watching the debates on GreaterAuckland about the massive sprawl of Auckland along the SH1 corridor, well, expect more in the next five years like you have never seen before.

It was amazing how much the Government valued concrete and steel and the actual construction, rather than sustaining or even improving the service levels of health for the citizens it was built for.

The speech claimed the Government was “on track to deliver a total of 18,000 public and transitional homes.” I am pretty confident it will get further questions on that claim.

Also weirdly no mention of the many Provincial Growth Fund projects coming to completion in 2021. Sure they’re not continuing with the programme, but it’s worth noting the momentum already generated.

The only piece of legislation of note was the Resource Management Act reform. So I have to wonder what else they will need Parliament for.

The speech went through the manifesto highlights like the $20 minimum wage and the Training Incentive Allowance, and the big Tupu Aotearoa expansion particularly for Pacifica communities – that has worked pretty well in Mana in Mahi and other programmes. Also they are going to fund up to 40,000 New Zealanders into work through the Flexi-Wage programme. Fair Pay Agreements are still proposed though they are not a success anywhere as far as I know.

They’ve got this Industry Transformation Programme thing that so far as I can see isn’t connected to anything else. I can’t even see where it’s being reported. It looks like they are preparing to expand the Innovative Partnerships programme together with NZTE’s dedicated investment attraction team. Surely this is the thing you do six months ago when you already have a medium-term competitive advantage occurring right then – and that advantage is exceedingly temporary once the vaccines are rolled out. Also oddly nothing on the public events still on track for 2021.

The speech recommitted to the 2030 100% renewable electricity target, investigating pumped hydro at Lake Onslow, and look more at hydrogen options. Best of luck to them trying to persuade the gentailers to remove barriers to micro-generation.

On health all that was mentioned was that there would be a government response to the Health and Disability System review, and you will get initial policy decisions sometime next year. It really was that vague.

The speech then went on to the Climate Budgets recommended by the Climate Commission. They know they need to decarbonise the transport fleet. They will start with vehicle emissions standards for imported vehicles, and without any target again try and increase the uptake of electric vehicles. They want zero emissions buses alone to be purchased by 2025. But nothing on a hard limit on older cars being imported, or even the mere question about whether to ban the import of cars with combustion engines.

In transport itself, they are going to roll out the good work that Minister Twyford did on the Transport GPS with a higher priority on public transport, walking and cycling. Missing of course is how they are going to make either Waka Kotahi or our Council actually implement these changes – many of whom inside still look and act like they are just waiting out this government. While public transport use is up in Auckland, it ain’t too flash elsewhere.

The speech did a good suck-up to farmers as “Creative, innovative and constantly looking to improve their practices.” But no mention of the big players like Talleys or Synlait or Fonterra or indeed Zespri or Constellation or others with actual leverage in generating higher value-added productivity for lower impact and input. All about the heroic farmers, and reducing their compliance costs. Which is weird because farmers won’t vote for Labour again and in fact that South Island left vote continues to trend downwards. But the entities the government has leverage over are the ones who need MFAT and Customs and NZTE and other state arms: agribusiness. Why no sign of applied leverage there?

Despite acknowledging that the economic impact of COVID19 will have a disproportionate effect on those least equipped to deal with it”, the speech  was at its most defensive on welfare. It put out the achievements of the last government, including the indexing of benefits to increases in the average wage. Also extending the free lunch programme to cover 200,000 students and adding 20 more mobile dental clinics. Silence on the remaining recommendations of the big report from two years ago – the main one being that benefits are punitively low and generate real poverty.

The speech  talked about the impact of housing affordability of all its tens of billions of economic stimulation as “perverse”. I could not think of a more stark failure of Treasury modelling than to admit the impact of such massive interventions weren’t on their horizon just 6 months ago when they recommended throwing tens of untagged billions into the open arms of employers. Perverse is the term in policy circles you use when you really mean “I forgot to predict it”. But they are clear that they will review their housing settings “with a view to implementing policies that improve access to the housing market for first home buyers.”

The speech didn’t even hint at any responses to the Royal Commission of Inquiry into the terrorist attack, other than what they’ve already done. I would have expected a few hints there given that the results are well circulated in Wellington.

It recommitted to making Matariki a public holiday. That’s got to make a little more sense than celebrating a bonfire of fireworks and sausages about the Catholics who were hung, drawn and quartered for trying to blow up the British Parliament about four centuries ago. But a bit of an opportunity lost for replacing the commemoration of foreign terrorism with a local one against Muslims.

On Maori relations, it was just more of the same. Nothing on the remaining Treaty claims.

In the conclusion it was abundantly clear that the Government is aiming to put a stake through National’s heart: “It is the government’s aim to achieve change along consensus. That is why it has committed to being a Government that will govern for all New Zealanders.”

That is also a function of precisely not using crisis to drive large scale change. The Government’s view is that this is the most to be the swan swimming with fast-paddling feet while exuding calm and grace above water.

That’s gradualist change seeking to keep that core of National crossover voters well on side.

No sign of attempting to get better co-ordination and strength of policy implementation – such as what to do with its shareholdings in the electricity generators, or ACC’s shareholdings all over the place, or the wayward NZ Superfund. No sign that they were in command of the full set of state instruments and controls available to them despite the obvious scale and depth of the multiple crises she admitted we faced. A very conservative approach to governance all round.

21 comments on “The Speech From The Throne ”