I’m not going to go over the whys and wherefores of this clause of the new copyright act. No Right Turn, Just Left, Public Address and David Farrar already have.

I got vaguely concerned about this when it went to select committee last year. But various people pointed out the issues to them. When I saw that the clause got removed in select committee, I moved on to more pressing matters – like the impending election.

Well it has reared itself again because the offending clause got put back in before it got passed in an even worse form than it was prior to select committee. I’ve been annoying people in the Labour political sphere for the last few days since David Farrar brought it to our attention. It was good to see that Clare Curran attempted to enter a bill to provide time to correct the main flaw today. Lew has put up the audio of the Nats stupidly blocking it over at KiwiPolitico.

I’ll explain my viewpoint from my most parochial of perspectives. It affects running this blog site – I will need to move the hosting offshore. It should demonstrate exactly how far the s92a clause goes from the intent of the people who moved the bill.

At The Standard we get a requests periodically to do something about ‘copyright’ items. This is common to every website with frequent page updates – especially those being done by volunteers. We have no idea about the provenance of most of the graphics on this site. They are located on YouTube or accessible on google images searches. If questioned we may try to find out. If we attempted to get rights for every graphic, then we’d never post any.

The last copyright violation was the NZ Police getting upset with me using a clip out of their website logo on posts critical of police policies and practices. Steve got a request from the police to remove it, which he did. He then replaced it with a picture of Cartman as a police officer wanting respect. There is a good chance that also has a copyright issue if someone chooses to get wound up about it. What we’re doing is to put appropriate images to the topics.

This cooperative approach to handling complaints between the rights owner and the site host has been normal procedure for a decade or so across the net in many mediums. On the 28th it is to be destroyed by a poorly written clause. That will force this site to move offshore as a (hopefully) unintended side-effect.

So some of the writers and I will do our bit for changing the the clause both now and for the foreseeable future.

The normal approach and handling of copyright violation is what Jordan Carter refers to as the “notice-notice” procedure.

InternetNZ, where I work, proposed notice-notice. This would have seen the complaint passed to the user, and remaining an issue between rights holders and users. We thought that was fairer, because ISPs should not be unpaid agents of the state in enforcing someone’s private economic rights.

The changed law would put the onus of making that decision on to my hosting provider who is located in NZ and is susceptible to this law.

For the $160 + GST per month that I pay them, there is no margin for them to make that decision on a considered basis every other month. Their optimal responses are to either increase the hosting costs (already high by world standards) to cover costs or just to ‘notice-takedown’ where a complaint is received so they take the site down. There is no requirement for the ISP to actually determine the validity of the complaint. It is likely that the ISP wouldn’t even be able to tell me who complained for privacy reasons. In any case it is likely that I wouldn’t be able to take action against the complainant – they did not directly take action against the site.

So imagine it is a troll or a politician that we’ve offended (as we do routinely). All they will have to do after the 28th is to find a graphic and complain about it. The ISP will take the site down for them.

One argument in favour of 92(A) is that the doom is exaggerated, and that rights holders will be visible and responsible, and would not make frivolous complaints. One would hope this would be the case, because a penalty for frivolous accusations was removed from the amendment bill.

That attitude is a load of bollocks. There will be frivolous and malicious accusations made because it is costless to the complainant.

Why do I think this is the case? Because I read the law as it is written not as people would hope it would be read. If something can legally be done with the legislation, then you may assume that at some point it will be done. This has come from hard and expensive experience.

I’ve successfully helped to defend two people in 2006 from a frivolous charge being laid by the police from a stupid charge of “intimidation by loitering”. That took 18 months and cost $30,000. It was a charge from a clause of the Crimes Act that doesn’t seem to have been used since it was written in 1981. That was done (in my opinion) so some over-zealous paranoid idiots at the police’s threat assessment unit could further their intel operations and obtain a search warrant. In other words, both frivolously and maliciously. The politicians debating that clause didn’t think that it would be used against either the unions or protesters – they were wrong. At least in that case we could and did argue it to the high court. 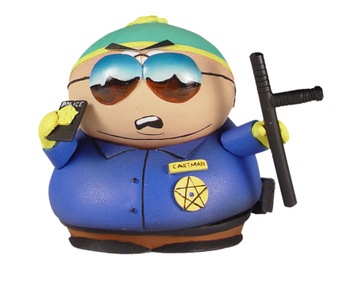 With s92a  it is likely that I couldn’t take action against the complainant. What in the hell would I try to sue them for? Imagine someone complained about our use of the Cartman image even though they are not the rights holder. I cannot sue them for making a mistake? Because they thought that the makers of Southpark might be offended by us using an image of Cartman that the makers of Southpark didn’t even make? And that is if I could find out who the complainant was.

Bad law sits around and eventually it is always used frivolously. This clause will be used friviously because there is no burden of proof or possible retribution against the complainant.

So I’ll move this site offshore because NZ law is being an ass. I’d advise the people in creative industries to do the same. From my reading of this clause, all it takes is some disgruntled person to maliciously derail your project (and there are a few around the arts communities). So it will even cause problems for those it is trying to help.