The supply of oil must peak, get used to it

There is only so much oil in the world. It was all formed when, over the course of a few hundred million years, creatures living in shallow seas died and their remains accumulated and were subjected to a very particular combination of heat and pressure for hundreds of millions of years. We know where all the sedimentary basins where oil could be located are in the world

(see the map) and we know pretty much how much oil is in those basins. We also know about how much of that oil can be extracted (oil can only be extracted when the pressure in the reservoir is enough to push oil up the well and the pressure falls as oi is extracted, artifically boosting the pressure as it falls with water or carbon dioxide has unavoidable limits – I know some of you will argue with me about this, argue with the oilmen instead). From this we can calculate what is known as the ‘ultimate’ – the total amount of oil that can ever be produced.

The ultimate for the world is about 3 trillion barrels of oil, if you believe the inflated reserve numbers from  OPEC members, closer to 2.5 trillion if you don’t. We’ve used about 1.2 trillion so far and are now using a billion every 12 days and growing. Let’s assume for a moment that we can continue to produce oil as quickly as we need to meet demand. With an ultimate of 3 trillion barrels and an annual growth in demand of 2% we would be out of oil by 2037: (source) 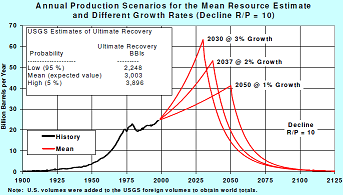 That’s pretty bad, running out of our major energy source in 28 years, but it doesn’t work that well in reality. Just because there is oil in the ground to be extracted doesn’t mean you can keep pulling it out ever faster. Every time you open an oil well the pressure is highest at the start and falls as soon as you start pulling out oil. The typical oil well’s production rises from zero to a very quick peak, then gradually falls away as the pressure pushing the oil out of the well decreases. On a larger scale, the easiest and largest oil reservoirs are extracted early on, followed by smaller, harder fields. The big fields start to fall and their decline cannot be countered by smaller fields coming into production. Take the example of oil production in Alaska: What applies to oil fields and oil provinces applies to countries and, ultimately, the world. The big fields are found early on (that’s not surprising, if you threw darts at a map you would expect to hit the big fields first and the oilmen are using much more sophisticated methods than that). They are also the most economic to produce from and so are used first. Smaller fields and improvements in extraction technology can keep production rates up for a while but at some point there is not enough oil coming out of new wells to replace  falling production from old ones and meet growing demand. You can keep on bringing more and more wells online but eventually there just isn’t any significant new oil to be found. Then, production must start to fall. Sure, there’s still oil being produced but there’s no longer enough to go around to meet even current demand, let alone growth. 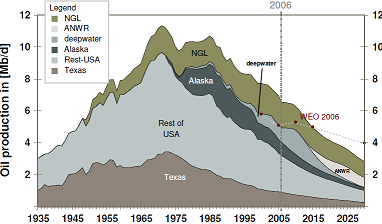 Of the 50 countries that produce 99% of the world’s oil, 30 have now passed their production peaks and another dozen have stagnate production. That’s again despite technological improvements, more digging than ever, and record oil prices. So when will world production peak? We won’t know for sure until several years afterward and it is likely that the world peak will be corrugated, touching a peak sparking a price super-spike like we saw last year, sending the world economy into recession, sending oil demand and price down temporarily, to be followed by another, lower, production peak and price spike when the world economy begins to recover, and so on. I’ll discuss estimates of when this expected to happen in the next post.

27 comments on “The supply of oil must peak, get used to it ”