Written By: RedLogix - Date published: 9:45 am, January 3rd, 2021 - Comments Off on The Tinkers
Categories: uncategorized - Tags:

My all time favourite sci-fi author Vernor Vinge depicted in his Peace War Trilogy a counter culture that had adapted to unique set of circumstances to produce a high tech/low energy society. The back story involves the discovery of a new weapon. Vinge being a computer scientist himself (he taught in the field at San Diego State U) writes up a tantalisingly plausible methodology, invoking both advanced mathematics, next generation hardware platforms and lots of energy to produce a perfectly spherical, impenetrable, mirror surfaced containment volume, colloquially called a ‘bobble’. The diameter and location of a bobble were input parameters to the process, and could be projected over some distance from the generator, all depending on the energy and computational power available. It appeared that once created anything trapped inside was sealed off from the rest of the universe for ever, and impervious to all attempts at undoing them, bobbles became the ultimate weapon. A totalitarian ‘Peace Authority’ gained early control of all bobble generators and the large power plants required to run them, asserting a global monopoly on political and economic power. Vinge, as with many good scifi authors has a definite libertarian streak in him, and his plot sets about the undoing of these villans.

The key element of this plot is that, in order to prevent anyone else obtaining bobble technology, the Peace Authority has to impose draconian limits on the energy sources and technologies available to the wider population. In the wake of a series of disasters population plummets, the survivors are much reduced although this is not an grimly dystopian world. Life reverts back to pre-industrial agrarian technologies. Most people become farmers again and are able to leverage sufficient tools and machinery to be reasonably productive. Horse and oxen power transport, village markets thrive, and those features of modernity that can be preserved (such as basic health, education and police) are adapted to the new circumstances.

Importantly an underground maker culture appears, calling themselves the Tinkers. Driven by the strict energy constraints they have to operate under, they find clandestine ways to rebuild some of the old industrial era technologies but operating with far lower energy. (For instance they had developed a very low power, highly encoded telecommunication network, relatively undetectable to the PA. This being a magical plot device in the 80’s yet just 30 years later became real; it’s called your cellphone.)

And while it wasn’t Vinge’s intention, this plot invokes very similar constraints advocated in the real world by some climate change activists, making story an interesting thought experiment. This ‘high tech/low energy’ path is an idea worth exploring, can our own society evolve a similar response to a similar pressure? This links to the third term in the Kaya Identity explored in this post that relates to energy intensity E/G. Can this term be driven low enough to reduce total carbon to the necessary level?

On the immediate face of it, the answer is no. Since roughly the 1960’s the developed world has gradually driven energy intensity down. Fortunately Max Roser and Hannah Ritchie have done the data work for us; if you are going to follow just one link please check this one, it’s central to this post. Conclusively it’s shows that while technology has been improving energy efficiencies for many decades, population growth and prosperity have nonetheless dominated the outcome. 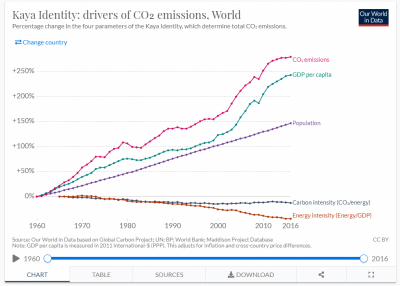 The E/G term in the Kaya Identity is fundamentally constrained by underlying Laws of Thermodynamics, which tell us that all energy conversion processes (which is what all technology is at root) have an upper ideal limit. We can approach that ideal limit (and in some cases such as massive ship diesel engines we get amazingly close to them), but we can never exceed them. We can never drive this term to zero. Vinge’s fictional world appeals to our innate sense that efficiency is highly desirable, but the boundary between reality and fantasy is drawn by hard physical laws we can never step over.