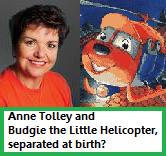 Most people have focused on the utter hypocrisy of National’s Anne Tolley flying around Auckland in a helicopter looking at education buildings from the air at the same time as the government says it can’t afford to help people falling victim to the recession. I’m more worried about how the helicopter ride came about.

It seems Tolley was meeting at AUT when someone tried to explain that to get a grip on her role she needed an overview, a helicopter view, of the tertiary sector.

Tolley thought that it meant she was going to get a ride in a whirlybird. She was apparently quite excited at the prospect.

Everyone was too embarrassed to explain the metaphor to her. So they arranged the $1800 helicopter ride.

It would be easy to think that this shows such a staggering level of ignorance or simply such sheer stupidity that it ought to disqualify a person from being a minister of the Crown, let alone Minister of Education.

Tolley won’t get the sack though. Basic competency has never been job requirement for ministers.

The most we can hope for is that Key doesn’t appoint our literalist minister to any razor gangs.