The toxic masculinity of Return of Kings 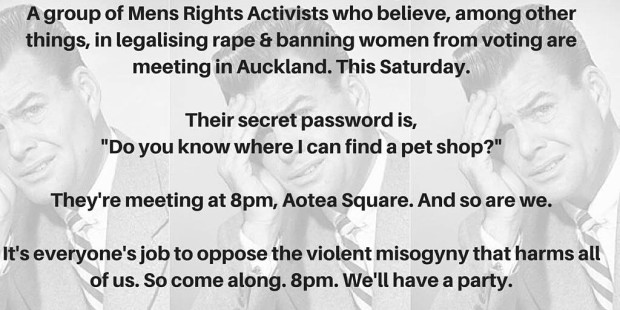 Earlier this week I saw that the violent misogyny website Return of Kings were planning global meetups. There were set locations, narrow time windows and even a password, straight out of a corny sixties spy movie. I laughed and told my wife. How ridiculous are these guys? Eh?

Not so ridiculous. I could laugh at it, as a guy, because I’m not the target of their vicious, toxic and deeply conflicted ideas and practices. Women are. It’s my sister who has to clutch her keys between her knuckles as she walks to her car at night, women who have pretend they can’t hear the comments and shouts should they wear anything short, summer appropriate or, actually given experience, ANYTHING. Not so funny then.

Because it’s men that do this. And yet there’s a prevailing opinion that women need to deal with this, women need to brush it off, ignore it or fight it. It’s not a man problem. Except it is. Since the media focused on this Return of Kings group, one of the replies in comments to a call for men to challenge misogyny is ‘Why is it my job to do this? I’m not a rapist’. Which entirely misses the point about how misogyny in society, often referred to as rape culture, is not simply rape statistics or domestic violence numbers. The culture of misogyny in society fosters the belief in some men that what they do to women is OK. And it’s not.

So if your mate expresses misogynistic opinions, you pull him up short and hard. If you’d stop someone being racist or homophobic, then why let misogyny go. Calling it banter or lads talk doesn’t cut it any more, because the real consequences of too many men letting too many little remarks, comments and wolfwhistles go lead to stuff like Kim Vinnell being harassed live on air and the discussion being about what she did wrong. Or Roastbusters. I mean, fucking hell man.

The Return Of Kings meetup is intended to be a meetup of straight men, in order to discuss the issues of neo-masculinity which include hating women and how to have sex with women. The deep conflict within these these men is probably the scariest part. Their utter disregard for women as equals, their use of derogatory language and and their disgust of women and their sexual attraction to them is probably the scariest bit. They have no idea how to engage with women as equals and yet are driven to attempt to do so by their need to prove their masculinity through sex. And when I say scary, I don’t mean for me. It’s not scary for them either, it’s scary for the women involved.

So, opposition. I’m against this. Obviously. Misogyny is a problem embedded in New Zealand society, it’s not just something that these guys are trying to import. My friend Dan and I have spoken to the media about our opposition, because men don’t speak up about this sort of thing enough and that’s not good enough. It also ensures the women who are involved in organising this don’t get targeted by the misogynists.

So, as a group, we have organised a peaceful counter presence in Wellington. I’m organising a similar event in Auckland, except I’d definitely call mine a party. And to counterbalance the idea that a group of straight men can organise a meeting to discuss their superiority to women, we’re going to have an all inclusive party in Aotea Square. Straight, gay, trans, men, women – you’re invited. Misogynists? Yeah, nah. The only proviso is that you don’t act like a dickhead, don’t make women feel unsafe and have a good time. That’s pretty simple, right?

We’ve got a playlist on Spotify made up of request, and I invite everyone to bring their bluetooth speakers, put on your dancing shoes and have a good time. If the Return Of Kings crowd turn up, they’ll be met with the joy of people who are determined to combat their ideas with the withering scorn and laughter they deserve.

The Wellington event has a facebook page which you can find here.

The Auckland event page is here.

So if you can make it, come along. See you Saturday!

28 comments on “The toxic masculinity of Return of Kings ”