The US abortion bans and women’s rights 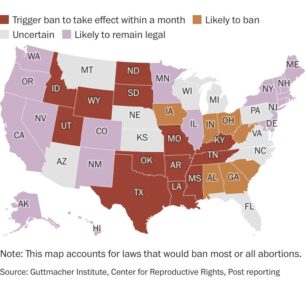 The obvious politics first. Roe v Wade, the US Supreme Court decision in 1973 that prevented state and federal law from restricting or removing access to abortion services, has now been overturned.

From the Guardian explainer The supreme court just overturned Roe v Wade – what happens next?

Historically, the court has overturned cases to grant more rights. The court has done the opposite here, and its decision will restrict a constitutional right generations of Americans have grown up taking for granted.

As a result of the reversal, states will again be permitted to ban or severely restrict abortion, changes that will indelibly alter the national understanding of liberty, self-determination and personal autonomy.

This is truly terrible. We knew it was likely to happen when Trump was elected, because there was large support for him from anti-abortion lobbyists and because his whole presidency was predicated on male assertion of power to do whatever the fuck he liked. His side was the one that wanted power at any cost. The patriarchy retains power by controlling women and others who are not part of the elite and who won’t support authoritarianism.

It gets worse. One of the judges has opened the door for further regressive reform,

Clarence Thomas writes, in a concurring opinion, that the Supreme Court should reconsider Griswold, Lawrence, and Obergefell — the rulings that now protect contraception, same-sex relationships, and same-sex marriage.

It’s clear that the hard conservatives in the US will do what they can to roll back liberal reforms of the past half century. This puts women, homosexuals, and gender non-conforming people (including trans and non-binary people, but also anyone who doesn’t fit conventional male/female norms) at risk. We know that the Trump presidency went after immigrants as well for instance, separating children from their families. This is the agenda of uber anti-liberal politics.

Enter stage left, the left? Well I’m remembering the left wing men in particular who argued Trump’s not so bad and who at the time denied that abortion rights were at risk. They were told, but it didn’t matter what women said, because there are progressive men who support feminism and women’s politics only so long as it aligns with their own, men who pick and choose which women’s rights they support or don’t. I’m not talking about disagreement here, we all get to do that. I’m talking about whether there is fundamental support for women’s rights as women determine.

Men picking and choosing under a system that men control this is regressive. Progressive is supporting women to have our own politics, trusting us to work through the issues ourselves.

Speaking of which, at the same time, in the UK during Pride month, a lesbian working class woman and feminist with a long history of work on male violence against women, is banned from a speaking event being held at a local library.

3/3 they said "no, you are not allowed in". So we will be having the event anyway, on the street outside the venue, and let them try and stop us. Anyone who could not get a ticket, meet us down there tomorrow and we will have our event. This cowardly bullshit stops here.

That by the way is grass roots feminism at its finest and most potent. You cannot shut us up. Lock us out and we will organise on the streets.

At this point it gets more complex. Gone are the conventional goodie/baddie left and right lines. Trans rights are human rights, but lesbians are losing theirs. Trans activism and allyship should be progressive, but more and more appears to have sanctioned some of the worst misogyny in politics many of us have seen.

Liberal organisations increasingly are removing the visibility of women and our politics,

What happens in California after Roe vs. Wade?

“You will see the impact of the spillover from other states,” said Cary Franklin of @UCLA_Law, who estimates that 8,000-16,000 people will travel to California each year for abortion care. https://t.co/znCGouQXlQ

In case that’s not obvious, it’s not people that travel for abortion, it’s women. Men aren’t losing their reproductive rights. It’s women, trans men and non-binary females. UCLA centres gender identity politics (using the term woman is transphobic) and thus erases the fact the abortion bans only affects those of us who are female. We can support trans men without undermining women, so it begs the question of why increasingly women’s language is being removed but men’s isn’t.

In one of the worse social media examples I’ve seen, Verso, the “largest independent, radical publishing house in the English speaking world”, tweeted this last week, 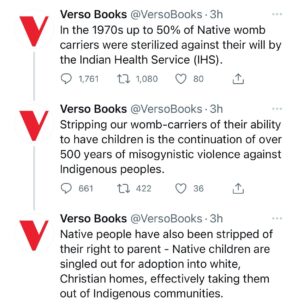 Unsurprisingly, women on twitter weren’t impressed and the negative ratio on Verso’s tweets would be one of the most extreme I have seen as women flocked to point out the dehumanising and racist nature of the tweets. Verso eventually took the tweets down, but failed to engage or remedy the problem.

Womb carriers, menstruators, birth givers, birthing bodies, non-men, baby factories, gestators… can you tell which is the language of the left or of the right?

It’s been apparent to me for a long time that women’s rights, including here in New Zealand, are at the grace of the dominant system that still largely favours men (even here in New Zealand). We have no baseline rights, only those afforded to us by the vagaries of the political systems that men control. At its worst, it’s Afghanistan and Malta. At it’s least worst, in New Zealand we have laws protecting abortion rights, and those laws are only a few steps away from us tipping into a populist conservative nightmare.

Think it can’t happen here? Go back ten years in the US and you will find that most women didn’t see the collapse of abortions rights in their future. Women in New Zealand tried to organise last year to talk about the impacts of self ID law changes on women and they had to go to court to just to retain venues. The right of women to organise around our own politics is already being curtailed, and with the blessing of many on the left who seem oblivious to how this would play out for everyone if we shift right as a country. Enter stage right, the US.

103 comments on “The US abortion bans and women’s rights ”