They just waste it on booze & smokes

John Key says the thousands of Kiwi families turning to foodbanks to get by are made ‘poor choices’. Among the ‘poor choices’ that poor people allegedly make according to righties is spending all their money on alcohol and cigarettes, rather than on food. As with most ‘truths’ that underpin rightwing prejudice, the facts don’t back this up.

Here’s spending by household income decile on alcohol and tobacco, and food – both in numerical terms and as a percentage of total household spending: 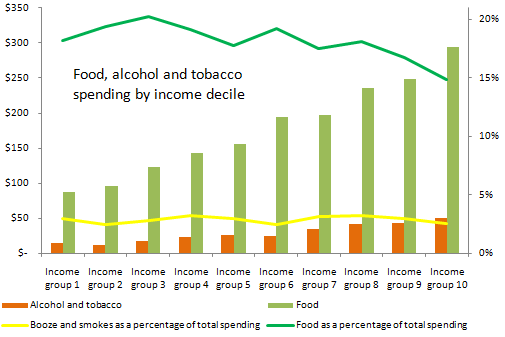 This data is from June 2010 before the current food price spike. One of the effects of poor families spending such a high portion of their budget on food is that a food price spike hits them harder in percentage terms. A 10% food price rise means that, if they’re to continue consuming the same amount of food, a poor family must knock 2.5% off their remaining spending, while a rich family only has to knock off 1.7%. And seeing as the typical poor family is spending already spending 46% of its budget on basics (housing, utilities, transport, and health), compared to 39% for a rich family, finding the money to pay for more expensive food from elsewhere is often impossible. No wonder that, in desperation, more and more families are turning to foodbanks as the twin oil and food price spikes (not to mention rent hikes and job losses) squeeze them hard.

Oh, and if any of the righties haven’t found the numbers give them a headache and are now quietly muttering to themselves ‘yeah, but they just waste all their food money on takeaways’, then consider the stats: 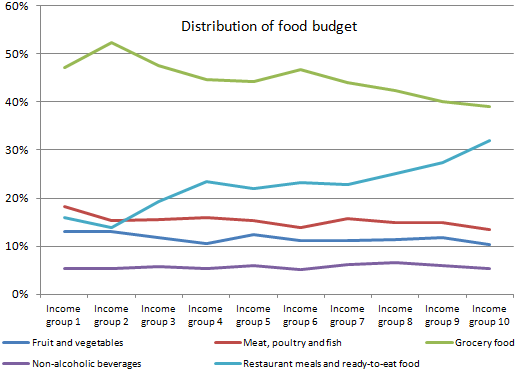 The typical poor family spends just $14 a week on restaurant, takeaway and ready to eat food vs $94 a week for a rich household. As a percentage of their total food budgets, poor families are spending half what the rich are on eating out.

So, still care to argue that poverty is the fault of the poor and that they’re making ‘poor choices’?Maybe you should listen to how it feels to have to turn to a foodbank when your country has abandoned you to line the pockets of the rich (8 minutes in):