Those who don’t learn from history…

Supposedly, we need Don Brash and a gang of his right-wing cohorts to tell us how to close the wealth gap with Australia. Brash and his merry gang are the same old faces from the neoliberal revolution of the late 80s and early 90s. Back then, they ruthlessly applied neoliberal economic theory to our economy in the belief that it was the perfect way to run an economy. But it didn’t work out well, except for the ones who bought up the assets we sold on the cheap.

When we started taking away workers’ rights, firing people hand over fist, making labour cheap, and selling everything that wasn’t bolted down, our wealth per person started to go down. The neolib promises failed to materialise. Meanwhile, Australia wasn’t embarking on a deranged neoliberal experiment, and they got wealthier, not poorer. 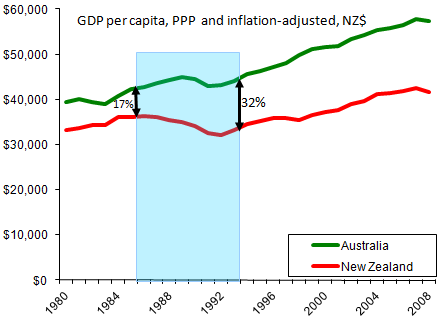 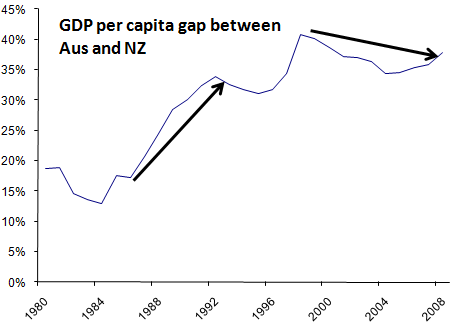 At the start of the neoliberal revolution, Australia’s economy was 17% per person larger than ours. By the time the revolution began to peter out in 1993-1994, the gap was 32%. The only time in the last 30 years we have managed to really start to close the gap was in the last nine years under a government that rejected further neoliberal reforms and made some efforts – Air NZ, Kiwirail, Kiwibank – to reverse some of the revolution’s legacy.

Now, stop me if I’m labouring the point but this is important:

It’s all very well to make up counter-factuals (‘we would have been stuffed if we hadn’t done it’, well, funny because Australia didn’t do it and they weren’t stuffed, in fact they did better than us) or claim that it was because of neoliberal revolution that we managed pretty decent growth after it stopped (a bit like saying ‘see you’re healing well, if I hadn’t been punching you in the face before, you wouldn’t be healing so quickly now!’) but the simplest explanation is the best: the neoliberal model failed to deliver growth, it failed to close the gap with Australia, it made it worse.

Brash’s economic snakeoil failed then and it will fail now if we try it again.

67 comments on “Those who don’t learn from history… ”