Time to wake up from the neolib nightmare

Back in the 1980s, some people who had read too much Milton Friedman and had drunk too much whiskey at Backbone Club meetings, thought adopting the neoliberal economic model, that had never been proven to work outside textbooks, was the way forward for New Zealand. Slash government, slash taxes (for the rich), slash wages, slash benefits, institute a ‘natural’ level of unemployment, (distract people by making the resulting crime a central political issue), float the dollar, drop all our tariffs even if no-one else would, and make controlling inflation an overriding priority. 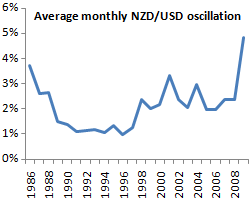 We know how wrong a lot of that went but I reckon the most underappreciated failing of the Right’s neoliberal agenda has been the floating currency.

Here’s a wee graph of the average percentage change each month in the exchange rate between New Zealand and United States Dollars for each year since the currency was floated in 1985. It’s an interesting pattern.

Quite a high amount of variability at first but after the 1980s generation of high-roll gamblers financiers lost their shirts in 1987, the exchange rate became quite steady. Good times for exporters. As they often say, the predictably of the exchange is as important, if not more so than the actual rate.

Then look at what happened as the credit bubble developed, hot money moving in and out of New Zealand at the speed of light, the currency slamming up, then crashing down. New Zealand, with our tiny economy has one of the top ten traded currencies in the world. It’s only gotten worse with the financial crisis as the smartest men in the room first bet it all on the US dollar, then changed their minds. In that last year, the exchange rate has changed an average of 5% a month.

The graph uses data up to September 30. Since then, in just one week, the currency has climbed another 3%.

How is any exporter meant to trade with such a volatile currency? You agree a sell at one price, three months later when the money comes through the currency may have worsened 10% making the deal uneconomical. Hedging isn’t free and even the experts seem as likely to bet in the wrong direction as not these days.

Hell, John Key can’t get close to predicting where the exchange rate will go next and we’re all supposedly in awe of his currency trading skills (although they saw he was more of a salesman than an analyst back then too). Just ten months ago, he was predicting he would see the Kiwi “with a 4 in front”. Just ten months later the currency is 50% higher than Key thought. Treasury’s Budget predictions, just five months old, are nearly 50% out and were already 20% by the time they were made public (their oil price projections are way out too).

No wonder exporting has been in trouble for a long time. And things are only getting worse as the world economic system continues to lurch between irrational optimism (the financiers’ natural state) and the reality that the system is still have fundamental problems, along with the resources and environment that support it. Our currency is bobbing around in this sea of uncertainty and it’s hurting us badly.

The neoliberal model has failed. The floating currency has failed, the Reserve Bank Act has failed. If we are to have a sustainable recovery these two outdated ideological barriers must be taken down and a more sensible, less absolutist solution put in their place.

18 comments on “Time to wake up from the neolib nightmare ”