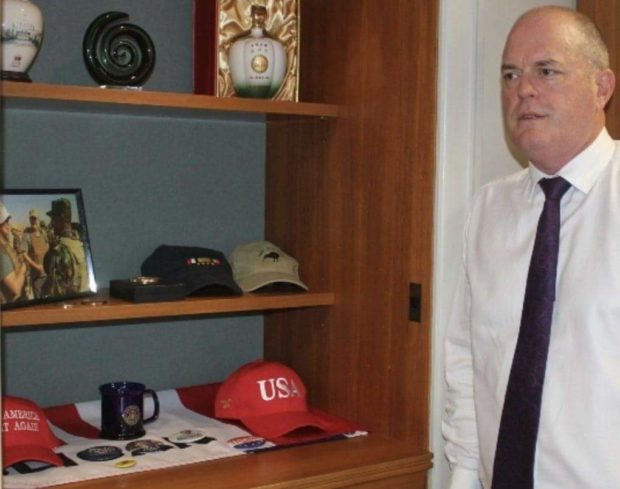 Todd Muller has spent the weekend talking about his aims and aspirations for the National Party.  No sorry that is a joke, he has been talking all weekend about his MAGA hat.

Sure it is something that an affectionado of American Politics would collect.  Like instruments of torture or a Klu Klux Clan hood.  But why would you display it?  And why when it was attracting attention would you let it dominate the discourse for the first weekend, the very time where all attention is on you and it is a chance to hopefully create a good impression.

And while I could understand an indifference on his part to the hat he should have realised that it has become a hated symbol, the modern symbol of white supremacy.  And when the Muslim Community urges you to put it away you would have to suffer from severe tone deafness not to hear their message.  From Amelia Wade at the New Zealand Herald:

Todd Muller’s Make America Great Again cap represents more than a trip to the United States and has no place being in his Parliamentary office, says a Muslim community leader.

Aliya Danzeisen of the Islamic Women’s Council said she understands it’s a souvenir, but the cap should be kept at home.

“If he wants to be the Prime Minister of New Zealand it would be nice if he’d choose to display objects that represent the values of New Zealand.”

Todd then topped things off by, checks notes, suggesting that Donald Trump was not so bad and the Democrats were also to blame for the state of US politics.  From Dan Satherley at  Newshub:

Asked on Magic Talk’s Sunday Cafe show what he thought of Trump, Muller said he was making the US a more politically divided place.

But he said Trump’s rivals, the Democrats, are also to blame.

“Over the last 30 or 40 years it’s become more and more partisan, and I think that doesn’t work for the country as a whole. This is not an anti-Republican or anti-Democrat – I think both sides have built that partisanship to the level that it appears from the outside to be becoming quite destructive.”

Anyone who can think that the Democrats are to blame for the extreme evil that the Republicans have been practising on the United States during the time of Trump needs to have their compass recalibrated.

Todd tried to walk back his earlier comment by criticising Trump’s style rather than his substance but if anything has made things worse.  From Claire Trevett in this morning’s Herald:

“I’ve been asked directly do I support President Trump’s style, and I say ‘not at all’.

“I find his style of politics appalling.

“Hopefully they can understand I am a respectful person, and that my collection of political paraphernalia doesn’t in any way seek to align myself to any particular political positioning of any individuals offshore.”

So he does not like Trump’s style.  Does this mean he is ok about the substance of what Trump has been doing?  The abysmal way that Trump has handled the Covid epidemic, the trashing of Constitutional norms, the active voter suppression steps, the rewarding of his mates and the mass incarceration of people wanting a better life?

To add to his problems Mueller has announced that he is reshuffling the National Caucus list.  And some of the details have already been leaked.  It appears that Bridges may be on the outer.  And in a particularly brutal take down Paula Bennett’s safe list spot may be taken by Amy Adams.  Paula may not make it back into Parliament given National’s list seats will be a priority.

Those first few days are meant to set the tone for the term of a new leader’s role.  Lefties will be quite comfortable with the way that the public persona of Todd Muller is emerging.