Trouble at the Gateway Hotel 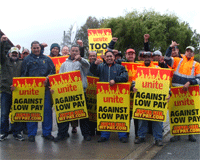 One of the worrying trends in industrial relations in recent times has been employers’ rediscovery of the lockout as a tool to break the power of organised labour and drive down wages. This is an extreme weapon, designed to starve the workforce into submitting to mangement’s demands, and is based on the brutal logic that an employer’s financial reserves and easy access to capital can hold out longer than a low-paid worker with a family to support.

In the last year we’ve seen lockouts at Progressive Enterprises, AMCOR Flexibles and Spotless Services, and they’re now joined by a dozen minimum wage workers at Auckland’s Airport Gateway Hotel who are today entering their fourth week of a vicious lockout that has left them literally locked out of their workplace without pay.

According to this report from the EPMU, the dispute centres around the refusal of the hotel’s new management to agree to a collective agreement with members of the Unite union. When the workers took strike action to protest against being stonewalled, management responded by locking them out indefinitely.

Word has it this is not the first time Gateway Hotel has received attention for the appalling way it treats its workers.

In November last year incoming management sacked a waitress because her pregnancy was perceived to be a “liability” to the business. She is still waiting for her case to be heard.

The hotel is also currently under investigation by the Department of Labour for paying some of its cleaning staff less than the minimum wage.

Unite organiser Daphna Whitmore, who’s manning the picket line, says hotel management has been harassing union members, telling staff to leave the union, and has even brought in illegal labour to do their work.

During the first few days of the lockout the boss brought in workers from a neighbouring hotel, which is a clear breach of employment law. He also got a friend to help with the work, but the man quickly left when he realised he was scabbing. He was genuinely horrified and apologised to the workers on the picket line.

The employer then threatened to ‘restructure’ and contract out the kitchen and restaurant work. Every day of the lockout he has called the police, and last week the staff were issued trespass notices, although only the delegates had come on to the site with union officials to inspect for outside workers, as they are entitled to do.

Many of the staff at the Gateway Hotel are long serving and most have families to support and rent to pay. One locked out worker, Alone Ngaro, is eight and a half months pregnant and is worried about her baby.

It’s hard being locked out with the baby on its way. This is a very stressful time for me and my family and it’s made harder by not having money to pay the bills.

These workers are still standing strong but they need all the public support they can get. The brutal logic of the lockout only works if the workers are forced to stand alone. But as the Progressive and Spotless lockouts showed, with enough public support workers can turn the tide against this kind of employer militancy and even give the boss a bloody nose in the process.

So if you’ve got a bit of time up your sleeve this weekend, why not go and join the picket line at 206 Kirkbride Rd Mangere, which is runnning from 10am to 6pm, seven days a week. Donations of food, money or just your support on the picket line are more than welcome. For more information contact Unite at 09 8452132 or Daphna on 029 494 9865.

You can also contact the hotel’s new manager, Rakesh Sharma, at 0800 651 110 or [email protected] and tell him what you think of his employment practices.

3 comments on “Trouble at the Gateway Hotel ”