Unemployment back to English’s ‘realistic’ level

“if we continue with National’s policies over the next three years we will be able to create another 115,000 jobs and bring unemployment under 6%. These are realistic targets…Labour’s claim that it can bring the unemployment rate down to 3% is also a hoax” 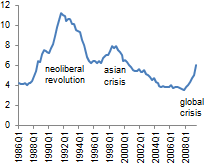 It was Bill English in 1999. Of course, after Labour won, unemployment fell and fell, getting down 3.5% and staying under 4% for four years. All that’s undone now. English has his ‘realistic target’. Unemployment has shot back up to 6%, the highest rate in nine years.

6% is far higher than expected. The consensus expectation was 5.6%. Social Development Minister Paula Bennett’s only response is to say the numbers were “no surprise”. A simplistic response from a simpleton minister.

40,000 jobs have disappeared in the time since she became minister (2%) and nearly all of them have been full-time jobs. An even higher percentage of work hours have been lost, down 3.5%. That doesn’t mean part-time jobs aren’t disappearing – more likely, losses of existing part-time jobs are being offset by full-time jobs becoming part-time. Hours are being cut back and people are having to settle for part-time work if they can get any. The number of ‘underemployed’, people who have jobs but can’t get as many hours as they want has shot up 40% to 114,000 in just nine months. What this means is that a higher portion of workers are now only able to get part-time work, even though many want full-time.

The pain is being felt hardest by a few groups.

Pasifika unemployment has nearly doubled in a year to 12.8% while Maori unemployment is up 55% to 12.6%. Both groups are seeing plunging labour-force participation as people give up looking for work, which masks the level of job loss somewhat. When you look at the number of Pasifika who are in work, it is down 14% in just 6 months.

33 comments on “Unemployment back to English’s ‘realistic’ level ”