The unions have proposed an alternative to National’s plan to slash Kiwisaver in half. If Kiwisaver has to be cut, and with National/Act in power it will happen one way or the other, then I prefer the union plan.

The unions have proposed that, if Kiwisaver must be cut, then it be done by keeping it a 4+4 scheme but capping employer contributions at $20. That way people on incomes up to $26,000 would be no worse off than under the original plan. And anyone earning less than $100,000 would not loss more than 1% of their gross income compared to National’s plan. This wouldn’t save the Government as much National’s plan and would be more costly to higher income earners but would protect people on middle incomes ($20K-$40K). 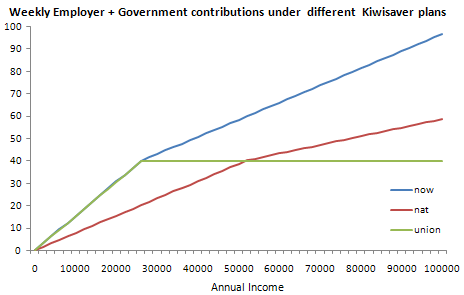 Key has apparently welcomed the plan, which should be a good thing but raises two worrying questions. How much thought did the Nats put into their changes if they’re willing to ditch it for another one just like that? Or is Key just telling the unions want they want to hear, as he is wont to do? If he is just placating the unions and has no intention of altering his plans, he will get a quick lesson that the tricks you can play in opposition come back to bite you when you have a position of real responsibility.