Voting for our lives: protecting the environment from the late capitalism death cult

The biggest downside of social media for me is the constant stream of evidence that the late capitalism death cult is still empowered to do maximum harm.

This morning it’s the news that Environment Southland approved an intensive industrial dairy farm on the banks of the upper Waiau, the river the feeds from Lake Te Anau into Lake Manapouri.

Environment Southland issued resource consent to discharge agricultural effluent to land from 1600 cows; to use land to build and use an effluent storage pond; and to use land for the wintering barns without public notification in May last year.

Emeritus Prof Sir Alan Mark, botanist and environmentalist, a founding member of the Save Manapouri campaign in the 1960s and 70s and long time member of the Guardian of the Lakes, is quoted in the piece about the issues with the geography and free draining nature of the land.

“This is a quite unacceptable situation which should have at least resulted in a notified application, open for submissions.”

He was “nonplussed” the council would not act to prevent effluent from 1600 cows as this seemed at odds with its previous approach, he said.

Manapouri is a taonga. Southlanders and then the whole of New Zealand fought hard in the 1960s and 70s to stop the lake being raised for hydro power generation. The Waiau River is also a treasure and in a sane world the true left banks would be being regenerated into native bush.

There is nothing that the death cult won’t try and steal or extract or pollute in the name of profit. By death cult I mean the people actively working against climate action, sustainability and resiliency, and regenerative landcare.

I don’t mean farmers as a class, there are plenty of good farmers out there. I mean Federated Farmers, the business people, banks and farm advisors pushing these projects.

We don’t need more dairy farms. We do need more native restoration, and regenerative landcare if we are to survive the difficult future the planet is facing.

Intensive farming harms soil, waterways, biodiversity and animals. When you start enclosing large numbers of animals in buildings or feedlots you are factory farming. Factory farming is cruel, and it creates disease that then means more antibiotics and other pharmaceuticals. It creates excess pollution that the land cannot mitigate.

Federated Farmers did some half hearted attempt at greenwashing,

“It is not a dairy farm, it is a grazing block that grazes dairy cows for 70 days a year, and putting them in a barn will mitigate all risks for the environment, and run off and sediment loss and nutrient loss into the waterways.

Mitigate all risks? That’s the sound of a dairy herd flying past.

“The barns are designed to un-intensify it and strategically place nutrients back on to the land at the best suitable times.”

Yeah, right. That’s the only Tui in sight.

Maybe their comparison is with the Southland mud farms? These are pregnant cows, 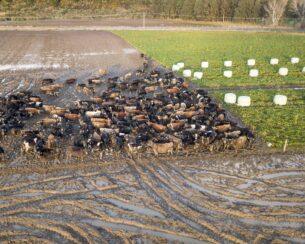 Or the Canterbury feedlots?

Only 1 farm left infected with Mycoplasma bovis… the disease that has seen more than 176,000 cattle culled & $220.3million public money payed out to compensate farmers finding it tough.

The disease remains on this farm in Canterbury. Can we call it a 'farm'? #EndMudFarming pic.twitter.com/lEY1C5ZAq2

This is the standard being set, and it’s being used to drag the Overton Window of what is acceptable towards degeneration.

But we can do so much better. Regenerative agriculture by definition regenerates land: soil, biodiversity, water.

This is what regenerative, resilient and sustainable farming looks like in New Zealand,

So when Federated Farmers rep says,

…opposition to the dairy block was based on emotion, not reality.

“They’re not going to be happy until such time as farming practices are gone, which in a country that relies on agriculture, is pretty naive.”

He’s either extremely ignorant or a paid up member of the death cult who doesn’t care about climate, the environment or animal welfare. The thing about emotion is that people that love the land will care for it. People that are devoid of that emotional connection won’t.

There’s not a lot we can do at the moment about Federated Farmers, or overly wealthy people doing stupid shit to the environment. But we can empower people in city, district and regional councils who will push back, and work to stop or lessen these kinds of developments.

I’m not writing a long, well-researched post on this. I’m pulling on my experience over a long time of environmental issues, and pointing to the fundamental problem here, that of world view. I’m not willing to have a debate about whether this project is ok or not, because the basic premise of it is inherently harmful to the environment. You cannot do industrial dairying and prevent climate catrastrophe.

Local body elections run from 16 September to 8 October, by postal voting (you can also drop your papers into your local council). Enroll now (same link). Let’s stop giving our power away and do the mahi over the next 5 weeks to support and elect the people we really want running the show. A big turnout from progressives will make a difference.

86 comments on “Voting for our lives: protecting the environment from the late capitalism death cult ”