Whaleoil and his toilet paper 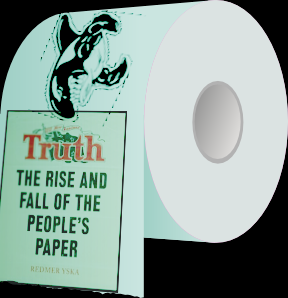 I haven’t seen a copy of The New Zealand Truth for many years. But I guess that it has been going down the toilet under the impact of modern media channels. But now it has really started heading for the sewer – Whaleoil has been made editor.

I have to say that I think that it is an inspired choice. I always felt that the criteria for a story to be present in The Truth wasn’t about the facts or even being in the public interest. It was mostly if they were likely to be sued by someone who could actually push through a defamation suit.

Since I was a kid, the so-called “People’s paper” has been a minor irritant in the journalism sphere attacking people and institutions who wouldn’t fight back because it was somewhat pointless to do so and because doing something about the crap that they wrote actually validated it. Everyone learned to simply ignore the stories from the Truth as being a shit pit for the stupid to gloat over.

Cameron Slater is perfect as editor as he has those essential bullyboy characteristics required in abundance. He has a eye for exactly the type of crap that the Truth specialises in. High sounding but completely inaccurate bullshit where the logic of the author largely consists of making 1+1 to equal 111. And when challenged, for instance by the courts on suppression orders, he can rapidly shift from bombastic to craven.

And of course it helps to keep a high profile deadbeat off of the taxpayers tab.  I wish him well in the role..

205 comments on “Whaleoil and his toilet paper ”