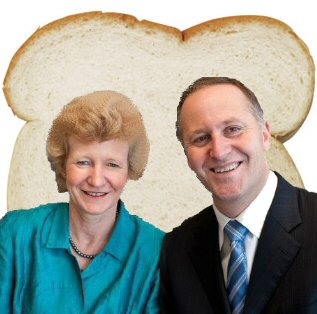 What a horrifying sight today’s Q+A interview with Minister of Food Safety Kate Wilkinson made. It was a shameful performance from a media point of view, with Wilkinson looking ineffectual, implausible and well out of her depth. But from a political point of view it was gobsmacking.

Wilkinson enthusiastically admitted that she didn’t agree with new regulations for the mandatory inclusion of folic acid in all bread (except organic) but pointed to other countries that have it. She also acknowledged that it may be unsafe but then said it is safe but “the science is light” (citing that it was some how not very qualitative or quantitative [wft?]). Wilkinson then went on to say she would review the regulation, presumably with a view to reversing it, after it comes into effect.

Yes folks, after it comes into effect.

Good for the bread packaging and advertising industries I suppose, with all that re-labelling and re-re-labelling that’ll be required, but the bakers aren’t too pleased with such dithering.

Wilkinson’s gross unpreparedness for that interview (or without a crash course, to appear in front of any camera for that matter), was painfully apparent. It looked like she was popping in to the studio for a quick chat with that lovely man Paul Holmes on the way to Sunday bowls. I think she got a surprise. She certainly seemed to me to have come off looking foolish, and the panel’s post-mortem suggested I wasn’t the only one.

Personally, I’m fairly agnostic about the fortification of staple foods. Folic acid deficiency is common in those who don’t eat enough green leafy vegetables (a tell-tale sign is a slight yellowey discolouration above the top lip, like a faint tan moustache). Adequate levels are vital for the healthy spinal development of foetuses. There are suggestions it may also potentiate prostate cancer.

Regardless of the arguments for and against, Wilkinson has oafishly admitted that New Zealand has either surrendered its sovereignty over its food-safety to Australia, or at least can’t be bothered causing any fuss, and is now passing regulations that our own Minister of Food Safety considers could be unsafe.