What the Commission said – Key on RadioLive

The level of outrage about brand Key’s freebie ad on Radio Live hasn’t died away. Tapu Misa wrote about it in yesterday’s Herald. Bomber Bradbury was sacked from RadioNZ for mentioning it.  Key’s staff spun to media that the show was ok if he didn’t discuss politics, saying the station had received advice from the Electoral Commission that “political content” could breach rules. That didn’t sound right to me, so I asked the Commission what they actually said.

They supplied the advice given to Radio Live, and at Radio Live’s request  to Willy Trolove in John Key’s office promptly [Download PDF]. As the programme had not been broadcast, they could not give an opinion on it.  They provided general advice about the rules. They quoted the law, which defines election advertisements and election programmes as “anything which may reasonably regarded as encouraging or persuading voters” to vote for a candidate or party. That’s been the law for a long time. The Commission didn’t say anything about whether talking politics or not made any difference. They didn’t clear the programme either as the Prime Minister’s office apparently said to a journalist.

The first and most important piece of their summary advice  was that:

“In the Electoral Commission’s view broadcasters need to exercise a high degree of caution with regard to party leaders and/or candidates hosting radio shows in the lead up to a general election. The broadcaster will be responsible for the content of a broadcast made with its authority.”

Secondly, they advised that Radio Live must ensure that the programme is not an election programme for the purposes of the Broadcasting Act as such programmes are prohibited before writ day.  They noted that there are serious penalties for broadcasters that breach these rules, and went on to say:

The Prime Minister hosting a show of this nature is likely to attract close scrutiny at this time in the electoral cycle. If Radio Live was to proceed with the broadcast it would need to be confident it could put in place adequate controls to ensure that the programme did not breach the election advertising rules in the Electoral Act or the rules regarding election programmes in Part 6 of the Broadcasting Act.”

The Commission’s general advice to Radio Live was that:

“Whether a radio programme is an election or electoral advertisement under the Electoral Act and/or an election programme under the Broadcasting Act is a question of fact which has to be determined on a case by case basis.”

They outlined a number of factors the Commission would consider in determining the issue on the facts, including whether the format is chosen by the broadcaster; the extent to which the broadcaster retains control over the content of the programme; are candidates and political parties subject to question and challenge; is the reporting objective and impartial; does the programme aim to inform the public by presenting a range of viewpoints (not encourage or persuade). 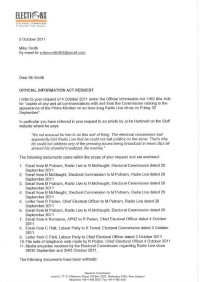 The programme’s purpose was advertising; in the words of Jana Rangooni, General Manager for Brands, “it is a programme we hope will encourage more listeners to our brand.”  Numerous commentators in the media have noted how the Prime Minister’s brand is the centrepiece of  National’s election strategy. The programme in my opinion also encouraged voters to support the John Key National brand in the election due in less than two months.

The Electoral Commission advised Radio Live to make sure that they had controls in place to make sure the rules were not breached. So what did Radio Live do? Send in Paul Henry. Henry is to rules as petrol is to fires. A week earlier, Henry attacked the Commission in interview with Matthew Ridge about a billboard with a “don’t vote Labour” message about which they had received a complaint. Ridge and Henry described the billboard as “advertising gold”. In the “Prime Minister’s Hour”, Henry gave John Key the opportunity to defend the controversial credit downgrade before Key signed off the inaugural Prime Minister’s Hour. Key did talk politics anyway.

If it walks like a duck etc it is a duck. If it is brand advertising for RadioLive it is brand advertising for the Prime Minister. I have put in a complaint about it to the Commission [Download PDF]. It is a serious matter; RadioLive will have computed the value of the encouragement to its brand and it will be considerable. It should serve as a benchmark for assessing the value of free and in my opinion unlawful advertising to the John Key National brand.

64 comments on “What the Commission said – Key on RadioLive ”