What they’re really playing at 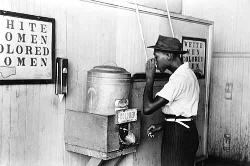 "Don't worry, the market will fix it"

Business Roundtable chair Rob McLeod has a piece in today’s Dom Post motivating the case for amending anti-discrimination laws to allow “affirmative action” in the private sector workforce. As an exercise in intellectual dishonesty it’s truly a masterpiece.

Selectively quoting the Chicago School academic Richard Epstein, a favourite in BRT circles, McLeod tries to motivate the argument in liberal terms. Why shouldn’t a female Maori entrepreneur be allowed to advertise for a female Maori workforce? he asks. They’re are just a bunch of good chaps trying to help minorities gain employment, you see.

Problem is, that’s not what McLeod is trying to do. What he fails to mention is that the Business Roundtable and Epstein’s real agenda is not to find new ways to help minorities, it’s to remove all anti-discrimination protections in employment law in pursuit of some Friedmanite utopia. The BRT website hosts several of Epstein’s speeches where he states his belief that “general anti-discrimination laws affecting private activities in competitive markets should be abolished.” He even published a book titled Forbidden Grounds: The Case Against Employment Discrimination Laws.

A charitable reading of Epstein’s work is that he believes employment law stopping employers from putting “No Blacks or Jews” on their situations vacant ads is ineffective and counter-productive. Instead, we should allow employers to openly discriminate against people on the basis of race, age and sex because the free market will punish them for their irrational choices.

Of course, we all know the large corporations that fund the Business Roundtable and fly academics like Epstein around the world for speaking tours don’t do so out of some sense of intellectual curiousity. They promote this stuff because, as Epstein puts it, employment regulations impose “costs” on businesses. Among those “costs” is the right of citizens to seek employment without fear of discrimination.

Extreme? Yes. But none of this should be surprising to anyone. When you look behind the op-ed pieces and the headlines the BRT has always been relatively open about its real agenda, which is to remove all labour protections and introduce “at will” employment, a restoration of the master-servant relationship that existed before the labour movement’s social advances in the late 19th and early 20th century. The Employment Contracts Act was one example of this agenda, the Fire at Will legislation another.

This should be of concern to all of us. While the BRT is small in size it’s very influential. As the ideological vanguard of the National-Act government its ideas are heard at the highest levels and it has members sitting on nearly every committee and taskforce the government has set up. After nine years in the wilderness the BRT are back and they’re angry. We on the Left should take the time to understand what they’re up to.

7 comments on “What they’re really playing at ”