What was National’s role in the police raid on Nicky Hager? 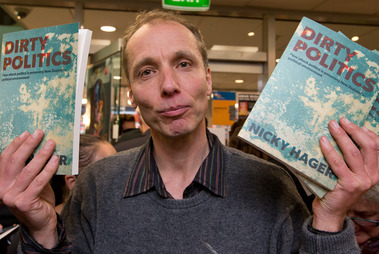 The repercussions of Justice Clifford’s decision that the police raid of Nicky Hager’s home was illegal are starting to be felt.  The decision itself is a scathing condemnation of the police behaviour and you really have to wonder how the police got things so wrong.  Having their behaviour described as “fundamentally unlawful” is as strong as you can get.

Essentially Justice Clifford has ruled that despite the huge resources put into the case the police failed to disclose to the Court that there were clearly issues of journalistic privilege.  There were fundamentally important public interests at stake.

As said by the Judge:

[121] I am therefore satisfied that the failure of the police to disclose in the application for the Warrant the s 68 issue, and more generally the principles and issues relating to media warrants identified by the Court of Appeal in TVNZ, was a material failure to discharge the duty of candour. The central issues relating to the lawfulness of the Warrant were not drawn to Judge Malosi’s attention. Those issues reflect fundamentally important public interests.

[122] It is also to be noted that it could be said Mr Hager does not act out of concern for protecting the identity of the Source. After all, he is adamant that no evidence of the Source’s identity remains in his possession. On the other hand, the Search necessarily put into the possession of the police, I infer from Mr Hager’s evidence, evidence of the identity of other confidential sources which was both protected by s 68 and, also, irrelevant for the investigation the police were conducting. In my view, the chilling effect of the issue of the Warrant and its execution needed to be seen in that context, and those matters also drawn to Judge Malosi’s attention.

There are two aspects of the decision which stand out to me, the description of Hager as a “political author” and the police’s searching of his daughter’s clothes drawers and her laptop.   The complete disregard the Police had for Hager’s rights and the wider issues of journalist privilege have rightfully received a very discretely worded but very clear bolloxing by the Judge.

National’s role needs to be investigated.  How were the police persuaded to take such extreme steps which have been shown to be so spectacularly wrong?

David Parker has commented on the issue in these terms:

“For the past two elections, complaints in the media from the Prime Minister have led to inappropriate and excessive action by the police against journalists. In 2011, it was the tea tapes, following a media stunt gone wrong between John Key and John Banks,” Mr Parker said.

Mr Parker said Hager had been painted as a villain by the Government after the release of his book and today’s findings vindicated him.

“Instead of the police attention being on the perpetrators, John Key kept asserting Nicky Hager based his book on hacked emails. The police in turn reacted on the public complaints by the Prime Minister and the formal complaint by Cameron Slater, and again turned on the media.”

Mr Parker said police and the Prime Minister needed to publicly accept that the politicisation of the police was serious and wrong.

Parker could have added the Police’s refusal to take action in relation to any of the complaints Labour made about the Dirty Politics revelations.  And the failure to investigate payments by Mark Hotchin to Cameron Slater to attack and smear the former head of the Financial Markets Authority and the Serious Fraud Office still rankles.

Winston Peters has also commented on the issue:

Mr Peters said a police warrant application had to be upfront and comprehensive, and in the Hager case it was not.

“That shows a serious deficiency of not understanding some of the fundamental rights of this country.

“There’s a seriously improper use of authority in the case of Hager’s home being broken into, literally.

“The second thing is, yes …. Hager says he does know the identity [of Rawshark] but in many cases, and every journalist would know this, you get information where you don’t know who the source is – you’d love to know but it literally comes off the back of a truck – you don’t know what the source is and you have to rely on it because of its apparent veracity.”

Mr Peters told Morning Report journalists’ ability to reveal the workings of the authorities was essential to democracy and the rule of law and the Hager case breached legal protections over keeping sources confidential.

“The big issue – put aside Hager, and put aside journalists – the public’s right to know is why this law’s in place in the way it is in the first place.”

So the question that needs to be answered is what political pressure was put on the police to act in the way they did.  A properly functioning democracy would be able to provide an answer.

130 comments on “What was National’s role in the police raid on Nicky Hager? ”