Where is Peseta Sam? 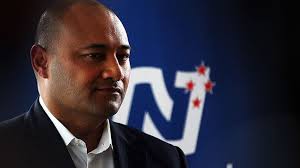 Someone send out a search party.  Peseta Sam Lotu Iiga has gone missing.

I feel somewhat sorry for him.  He is clearly there to give National the appearance of diversity it does not deserve.  And he has been handled the toughest of portfolios, corrections, at a time when Serco’s inability to perform the job at an adequate level has been so cruelly exposed.

And now that we are seven long years into Kohn Key’s reign claims that everything is always Labour’s fault are ringing untrue.

This week the inquiry into the saga involving Phillip Smith and how someone still serving a sentence for murder was able to travel to Brazil was released.  I posted about this earlier.  Mr Smith is someone with very few endearing features.  He had been convicted of sexually assaulting a young person, murdering his father, kidnapping and extortion.  While in jail he had somehow been able to engage in business, save over $10,000, gain a passport, buy a one way ticket to South America and then persuade the authorities to grant him weekend leave with someone who was not expecting him.  He then managed to get through customs and board a plane and ended up in Brasil.

Having passports issued in a different name is not a unique occurrence.  A couple of years ago the Government had to grapple with the situation where a convicted sex offender had changed his name by deed poll, obtained a new passport and then been able to obtain employment after a search under the new name disclosed no convictions.

A report into the incident recommended that “urgent consideration be given to require [Births Deaths and Marriages] to notify any registered change of name to the Passports Office, Customs Department and the Immigration Office of the Department of Labour and that appropriate protocols be put in place to govern that process.”  But clearly the recommendation has not been furthered.

To be fair to the Government it may be that if this particular change had occurred Smith may still have avoided detection as his passport was issued in his birth name.  But the need for some ability to exchange information is clear.

And as confirmed in the report the breach occurred through multiple failures, not only because of the issues surrounding the passport.  These included a failure of Corrections to contact sponsors prior to the leave being approved, the failure to adequately assess risk posed by Smith, and the failure to inform police as soon as Mr Smith’s disappearance was discovered.  All of these jobs depend on the proper resourcing of back office staff, those dreaded public servants that this Government thinks are a blight on the country’s finances.  When you take out the back office staff the front line clearly functions poorly.

A member of the victim’s was interviewed yesterday on Radio New Zealand.  She had asked for 24 hour supervision of Smith during his leave release and described him as manipulative and said that he could not be trusted.

You would think with all these agencies, someone would be accountable, and that leaves it with the government, doesn’t it.

They’re all ducking their heads, he should be hanging his head in shame, John Key if he’s the top one, but definitely the Corrections Minister.”

Amy Adams fronted up to answer questions.  She thought that Sam had been giving back to back interviews in the past couple of days and that it was all the fault of liberals so I am not sure what weight can be given to what she said.

If Sam can be found he should be asked about the recent report of a rape that occurred in a double bunk cell in Serco’s South Auckland prison.  This Herald article reports on the potential misery caused when a prisoner previously in segregation was placed in the main unit and in a double bunked cell.  There is a police inquiry into an allegation of rape.  The prisoner complained to his family that he was assaulted by seven different prisoners after being moved from secure and that he was repeatedly raped by his bunk partner.  Police inquiries are ongoing.

This latest incident is on top of further revelations made to Kelvin Davis where an inmate had reported that the South Auckland facility was becoming like Serco controlled Mount Eden Correctional Facility.

It was utterly predictable that double bunking would increase the incidences of sexual assault and rape in prison.  After all it was pointed out to them when Judith Collins first floated the policy.  And John Key?  He was relaxed at the prospect:

Mr Key said in general he was comfortable with the idea.

“In my opinion, where double bunking will work and where there is satisfaction that it can be appropriately be carried out, we should do that, because it reduces the demand on the New Zealand taxpayer,” he told reporters.

Inhumanity mixed with indifference and incompetence is a powerful destructive mixture.  When Sam is located he has a lot to discuss with the public.

Update:  If this is true heads should roll …

http://t.co/L5ZZJZRWcX We're in contact with the person in this article. @nzherald are misreporting her as a cis man. she's a trans woman.