Which Labour Party Conference is Brook Sabin at? 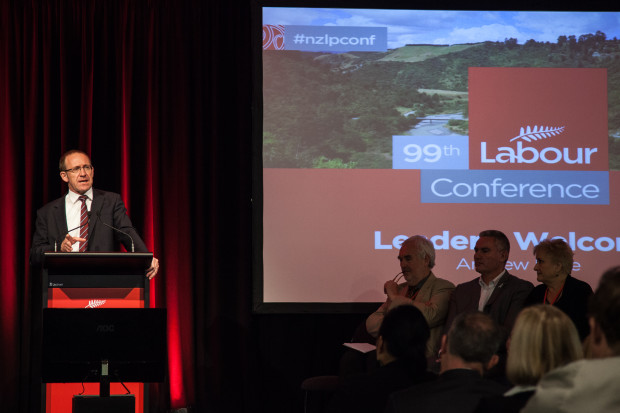 Day one of the Labour Party has passed. Numbers are damned good for a provincial centre, over 520 registered delegates not counting observers. The mood is upbeat with some very good speeches last night, a well deserved gold badge for Maryan Street, and much emphasis on the importance of activists in what we do for the party. And last night was marked by much laughing and singing and the occasional imbibing of liquid refreshments and despite suggestions to the contrary Stephanie Rodgers and I did not eat all the pies.

So this morning I was rather surprised to wake up and see replay video of Brook Sabin talking about the first day.  To him it was all crisis.  The party was bitterly divided.  The language he used about the party bore no resemblance to what I had witnessed.

Andrew Little was said to have a major problem, the release of the TPP was a “six thousand page grenade thrown straight into the Labour Party conference”. The trade deal would “eventually” worth $2.7 billion dollars per year to the New Zealand economy (doncha love it when the media unquestionably adopts the Government spin).  And Labour was set to oppose the deal because it prevented New Zealanders from banning the sale of land to overseas persons.

Little was then attacked for being unable to “give a straight answer” on whether Labour opposed the deal.  Jesus Mary and Joseph.  The text has only just been released.  It is no normal document.  Every single page is full of mind numbing legalese.  It will take months and months for a well researched organisation to properly understand the implications.  Of course Labour will have to take some time to properly consider the implications.

Sabin’s commentary involved the worst sort of spin.  It is not surprising that TV3 post Campbell is struggling if the quality of this commentary is indicative of what happens.

Basically it felt like TV3 was running gotcha questions for the Government.  If Little said that Labour opposed the deal they would have been branded as economic luddites.  If Little had said that Labour supported the deal despite all of the deal’s flaws Labour would have been branded as hypocrites and unfit to rule because they had taken such a knee jerk response to an incredibly complex document.

Obviously the Labour Party needs to go through a process to make a final decision. I am not breaching any confidences by saying that some within caucus are supportive of free trade.  And I am confident that further analysis of the investor state resolution procedures will also trigger the breach of another of Labour’s bottom lines that “Corporations cannot successfully sue the Government for regulating in the public interest”.

I don’t expect a final response soon from the party. I doubt that it can make a final call on the protection of Pharmac because as far as I am aware that detail has not been released and is in a still hidden document. And the bottom line on meaningful gains for farmers in terms of tariff reduction and trade access will need to be assessed properly although the Dairy Industry’s initial response suggests that the gains are marginal at best.

But it would be great if the reporting on the conference involved talk about what was actually happening.  Rather than poorly designed spin trying to create the impression of a crisis.

148 comments on “Which Labour Party Conference is Brook Sabin at? ”