Who grows better? Labour or National?

Under the last Labour-led government the GDP per capita rose 15.6%. Under John Key’s National, it has fallen 1.9%. ‘Ah but Labour was just lucky and Key has just been unlucky’, say the righties. Which suggests righties think economic policy doesn’t matter and makes you wonder why we’re arguing. The data, however, shows conclusively which party has the best record on growth.

Here is the average annual (June year) growth for each government since 1935, ordered from largest to smallest. The bars in bold outline are the averages for Labour and National governments. 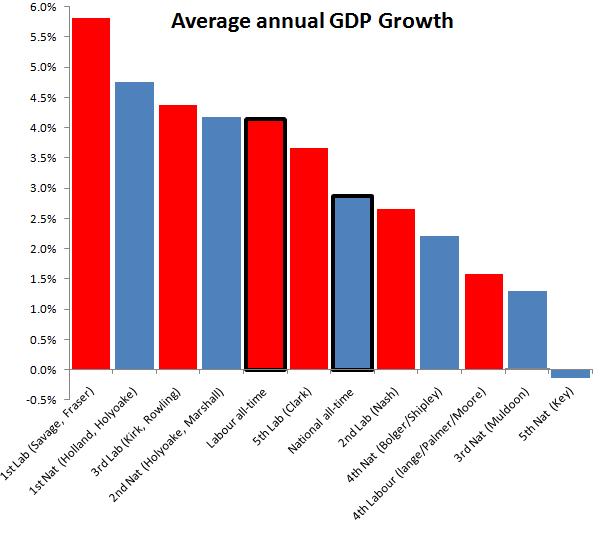 So, it’s pretty conclusive that Key sucks as an economic manager. Worst record in 80 years, and by a long, long way.

It’s also clear that National is consistently worse than Labour: 2.9% vs 4.1.

It’s also interesting to see that growth rates are tending to slow. The Fifth Labour government excepted, the governments since 1975 are the worst performers on growth. I wonder if this was inevitable (that there is an exception to the rule suggests not) or a result of, first, National’s disastrous Think Big, then, the neoliberal revolution and, now, Key’s bastardised amalgamation of the two wherein we sell assets to pay for motorways we don’t need.

I haven’t included the Liberal/Reform coalition government that referred to itself as the ‘National government’ from 1931 to 1935 but, interestingly, even that government from the height of the Depression had a better growth record at 2.6% than all the neoliberal era governments (except, again, the Fifth Labour government).

If CGT vs asset sales hasn’t convinced you already, the records should: if you care about the economy, put a Labour-led government in charge of it.

89 comments on “Who grows better? Labour or National? ”