Who wins from digging up Coromandel

Gerry Brownlee is talking of digging up Coromandel to extract a few tens of millions of dollars worth of gold. Naturally, the company that owns the Waihi mine is all for it.

The local community gets little benefit from mining. According to the 2006 census, unemployment in Waihi is twice the national average (8.3% at the time, compared to 4% nationally) and the median income was just $15,000 compared to $26,000 nationally. 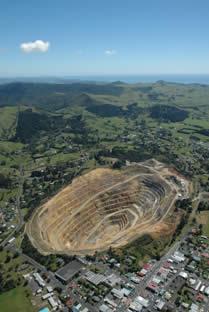 The local community does bear the costs. There’s the physical damage to the landscape, despite the claims to the contrary. Not only does Waihi have a whooping great hole in the ground, which will be hazard for decades, but collapses over mining tunnels have resulted in 46 houses being condemned. Not to mention the noise, dust, and vibrations that lower the quality of life in Waihi.

Meanwhile, the foreign-owned company makes off like bandits only a relatively small number of jobs are created. Then they leave the locals to clean up the mess.

The people of Coromandel united to prevent further mining in the 1980s. Their feelings haven’t changed since. They know that their natural environment is far more valuable than the scrappings they would get from letting someone from overseas come in, dig up their land, and take away the gold.

It’s a pity that this government only understands the value of gold, and not the value of a natural environment to the local community. I think the people of Coromandel will be teaching them that lesson the hard way.

17 comments on “Who wins from digging up Coromandel ”