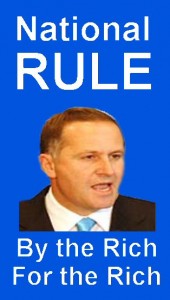 Last week John Key used poor United States sales of the new BMW 7-series – 10 were sold in February, compared with more than 1500 in the same 2008 month – as an example of how much other countries were hurting in the economic crisis. But New Zealand…  sales of the top-of-the-line BMWs [are] moving in the opposite direction. In February, New Zealand – whose population is approximately 1.3 per cent of the United States’ – bought three BMW 7-Series, compared with one in February last year.

An amazing comparison that just goes to show not everyone’s hurting in this recession. And with National’s new tax cuts things just keep looking up and up for New Zealand’s very wealthy.

National’s plutocracy means those who least need money get the most, those who need it the most are getting nothing.